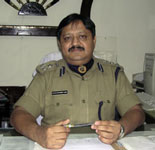 "She is like a mother to all. I look upon Her as an excellent human being; She is always serving humanity, She has nothing of Her own." —Shri. Mohammad Yasin

“I’m preparing myself for seven nights without sleep,” Cochin’s deputy inspector of police, Shri. Mohammed Yasin, said with a smile. Not only did he have hundreds of thousands of guests coming to his city from around the world for Amritavarsham50, but there was also an election right before the celebrations. It would be the Yasin’s duty to make sure traffic flowed freely in the city and that all the guests and VIPs were well served and protected. All of his 3,500 officers were involved.

But Mr. Yasin was not worried. “Mata has created so much goodwill in Kerala. I see Her as a great human being. She has done so much for the poor and destitute of India. I was personally responsible for the security of all the VVIPs when the AIMS Hospital was opened in 1998. There, people get treated for the most reasonable prices. Many even free. And you see all types of people there: Christians, Hindus Muslims, communists. Where can you get heart surgery so cheap in the world? Only there in Mata’s hospital. All other hospitals are commercial and don’t have the policy or the money to treat poor people. They don’t have the motive to serve humanity, and that is what makes Mata special.

“Through all of Her educational institutes, She is really serving humanity. Also in Amritakuteeram, Her housing projects, people from all denominations can come and live. All these aspects make Her unique. For a person who is only 50 years old, this is really remarkable. Who has been able to achieve so much at that age?”

Mr. Mohammed Yasin met Amma for the first time in 1993. “She is absolutely warm and embraces you as if you are a child. She does not discriminate whoever is in front of Her—She is like a mother to all. I look upon Her as an excellent human being; She is always serving humanity, She has nothing of Her own. Society is divided in such a way, but in this world we should recognise and appreciate someone who propagates love and understanding. My being a Muslim in that sense hardly matters. I see many similarities. For example, as a police officer, it is my goal to ensure peace and harmony in society. In that we share a common goal!”

Would you recommend any of your officers to go for Amma’s darshan?

“That is totally up to them; it is there private choice. If they think they can benefit from it, they should go. We don’t encourage anything as a police force. But I have good expectations for anyone who goes. She is a fantastic human being. I think we all should support someone who is promoting love and brotherhood.”