Anil K. Dilwali and his family came to see Amma during Amritvarsham50 with a very special gift—108 copies of Amma’s life story in braille. Mr. Dilwali was kind enough to recount us the full story. 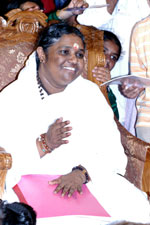 When Amma was presented with Messiah of Love, Her life story in braille, She gently ran Her hand over each page

“Last April, a family moved into our neighborhood in Gurgaon, a suburb of New Delhi. We met them one day—very recently—at the nearby bus stop, and after getting to know them and learning a bit about their moving story, we developed an immediate fondness and sympathy for them.

“The family—22-year-old Priyanka and her parents—had experienced a number of difficulties in their lives. After undergoing surgery for a brain tumor when she was four and a half, Priyanka sadly lost her vision. From that moment onward, the family has had to endure the obstacles and disadvantages that usually attend a life of blindness, such as medical expenses, educational limitations and a general lack of real opportunities. To add to this, Priyanka’s parents have had trouble finding jobs, and, with the economic strain due to Priyanka’s condition, have suffered financially. Fortunately, despite her limitations, Priyanka managed to take a course and secure a job in the travel-and-tourism industry, making her the sole source of income for the family. Such a triumph!

“We heard all of this and were deeply inspired. We became aware of just how challenging the lives of the blind are, and we wanted to do something to help. We wanted to offer some hope and encouragement to them and their families, and help make them more aware of the options available. The thought occurred to us that Amma would definitely touch this family. Naturally, being Amma devotees, this thought led to the idea of printing a book on Amma and Her message, experiences and activities in braille. We titled it: Amma: A Messiah of Love.

“The next step was finding a publisher. We turned to the All India Confederation of the Blind, as they are the leading braille press. We contacted J.L. Kaul, the secretary general of the AICB—himself visually challenged—who began the Confederation with just 300 rupees and a few fellow blind persons.

“Initially, he said he was currently too busy printing textbooks. Asking again, we even requested if it would be possible to have them printed within the week, by the 15th of September, so as to make sure they were ready for Amritavarsham50! At first, Mr. Kaul was a little annoyed at the request, especially after having already explained that he was too busy. But we began to talk about Amma and what we were trying to do, and he had a change of heart. He agreed to help us.

“We also wanted to have a braille ‘drawing’ of Amma’s face on the cover. We asked if it would be possible to do, but Neetu, one of Mr. Kaul’s young computer assistants, wasn’t sure about it. However, my wife asked Neetu to try, and to pray to Amma for it to work. Neetu then remembered that the organisation had just received a new piece of equipment that could probably do it, and a few hours later, the cover was finished! She said that she did, in fact, pray to ‘Mama,’ as she very innocently referred to Amma, and somehow it all happened so quickly!

“As an auspicious gesture, it had been suggested to us to order 108 copies, but I ordered 110, just to have a couple extra copies. When they were ready, we went to pick them up at the press, and what did we find? They had wrapped each bundle with such care, and even with golden ribbons! They also asked us to please have Amma bless them and the organisation, so they could prosper and get even more equipment for their good work.

“We called Amritapuri, and a brahmachari there suggested we send one or two to the Ashram ahead of time, for Amma to see. We sent them, however they never seemed to reach the Ashram! This left us with the 108 copies to bring to Amritavarsham50, which did indeed seem auspicious.

“Arriving at the International Stadium in Kochi on 25 September—which also happens to be our son, Keshava’s, birthday—we went for darshan. We told the brahmachari we spoke to on the phone that we had the books with us, and he told us to come show at least one to Amma. Ranjana, my wife, and Keshava and myself came closer and waited to be called by Amma. Finally, at 11:30, the exact birth time of Keshava, Amma called us. Another auspicious sign!

“We presented Amma with a copy of the book and explained what it was. This was the first time Amma was hearing about it. As I was showing and explaining it to Her, Amma was smiling and gazing deeply and lovingly into my eyes, while running Her hands over the cover. Then, with tears streaming down Her face, She opened the book and ran Her fingers over every single leaf. With each page She turned, another tear fell. Few around Amma were without moistened eyes as well. It seemed as though Amma was speechless with love, and we felt overwhelmed with Her emotional response.”