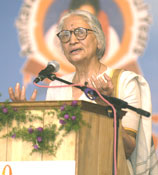 “Amma, everything has been said. My colleagues who spoke here, they’ve invoked the earth. They’ve invoked the waters and the rivers. They’ve invoked Nature. They’ve invoked man – positive and negative. They have gone through the scriptures – Vedic, Upanishadic, Brahmanical, mythical, Judi, Christian and all. And all the powers have been both invoked and put before You as offering to Your Lotus Feet. What do I say at this moment then in words, when in words all that, perhaps, this universe and this world of ours, of men and women, have made and unmade?

“Amma, you carry that spirit of the Nature that was spoken about by Linda [Evans]. You carry that spirit of suffering and injustice and peace of which Ms. [Yolanda] King spoke about, and the equalization of balances that Najma Heptulla spoke about.
“And all those women from the Chandogya and the other Upanishads, and Shekhinah [Jewish concept of divine feminine, as discussed earlier by Rabbi Leah Novick] and all else.

“However, there is something that I still want to invoke here as offering because You come to us with that power, that power that is Nature’s power, Nature’s power, and which man, in his egoism, in his arrogance has assaulted first Mother Earth, Mother of Mothers, the sustainer which is invoked in the prithvi sukta of the Athar Veda. An embodiment that disfunctioning because we have assaulted the pancabhutas [five great elements] as we have assaulted the pancindriyas [five senses]. And in this, if in Your blessings as of today bring back that restoration of balance, it will be the beginning of renewal.

“Mridula [Sinha] very brightly and rightly referred to that Your birthday coincides with the Navaratri [Nine Nights festival in celebration of the Divine Mother], and whether in that part or this part of India, this is that moment of the woman’s seed under the Earth to come out as energy, and that is why it is known as garbi [a symbol of the Divine Mother women dance around during the Navaratra Festival]. However, what have we done with this? These myths and these rituals that stood for both symbolism and functionality at the social level, we have trivialized them. We have made them into entertainment. We have made them into commodity of what today, if I may say, in the arts is the garba [the Navaratri dance itself] and so on. These profound messages that were contained at the social level. While at the mythical level we speak of Saraswati and Vak [Vak Devi, Goddess of Speech] and the rivers and we shall be celebrating Durgapuja [Navarati], and, as in Kerala, which I have known for years, and this is my home country for 50 years. I have walked every village and hamlet, and Devi temples here, and in the Mudyeatu Tradition, when Kali becomes somebody who is the antagonist of Tarkasur [a Puranic demon], we should invoke these and in the very nature of invoking these images which belong to this tradition, we shall also have the dysfunction of our social life, which was outlined by both the predecessors, my previous speakers.

“There is the question of what kind of instead of the great motherhood that we have been, that we have been thinking in terms of the woman and, which is being articulated by previous speakers, of equality; we don’t want competition. In this, or in earlier civilizations in the world, women was primary, going back to the civilizations of Mesopotamia and Syria and everywhere else and including this country, we are different and we want the principle of complimentality and not of competition. The principle of being different, the principle of being one-not-complete-without-the-other and the principle of the mother and the other, because the mother is the only one who understands herself and goes out to the other to understand the other. Which is the beginning of altruism, which is the beginning of that selflessness which all of mothers are conversant in. And therefore, Mother, on behalf of these 10 speakers and more, allow me to offer You my pranam: shat shat pranam, shat shat jiivemasaradah shattam. O Devi, Sarvabhutesu.”