It was only with the commencement of the Jala Mahasangamam that most people realised that, indeed, the world had come to celebrate Amma’s 50th birthday. The procession for peace involved representatives of all the 191 United Nations countries (as well as Tibet and the Native American Nation). The participants had been at the celebration since its beginning, but not until their traditional costumes were dawned and the flags were all raised could the impact of what was happening truly be felt. The world was assembling in our midst. 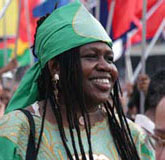 One could glimpse the diverse characteristics of each country through the variety of their national costumes. And as we paraded along the circumference of the stadium, it felt as if we were circumambulating Mother Earth Herself.

As we entered into the stadium and began merging the waters of our countries, the symbolic resonance of what we were doing became clear. A second before, I had been carrying water from the island country of Cyprus, but now that we had poured it into a vessel with waters from India, from Canada, from Colombia, etc., who could say which waters were which? 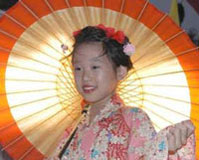 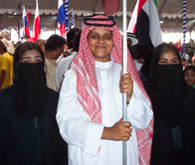 I was reminded of Amma’s concept of this world as being like a flower: “This world is like a flower. Each nation is a petal. If one petal is infested, does it not affect all the other petals? Does not the disease destroy the life and beauty of the flower? Is it not the duty of each one of us to protect and preserve the beauty of this one-world flower from being destroyed? The world of ours is a big wonderful flower with many petals. Only when this is understood and becomes ingrained within us will there be any real peace and unity.” 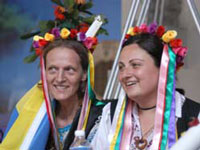 That afternoon, the petals of the world came together to form a flower for Amma. I felt moved to have had the privilege of participating. I am certain that the parade created subtle ripples that are now spreading throughout the world, helping to create world peace and harmony, which was the message and prayer at the heart of Amritavarsham50.

This entry was posted in Jala Sangamam, Summit. Bookmark the permalink.