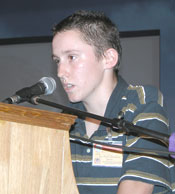 "When I first met Amma, I was like many young people in my country—very self-absorbed, spiritually dull and angry at the world. Since then, I am becoming more centred in the ways of spiritual life and awake to the need of becoming part of the solution to the problems in the world." —Mila Hamilton

An overview of her Amritavarsham50 Youth Summit speech on Amma’s impact on her life.

According to her speech, Mila discovered new inspiration in Amma, after being disappointed in a society that she found to be too materialistic. She looks to Amma for guidance and for developing leadership to change the society she lives in. For her, Amritavarsham50 was a strong sign of the power in the realisation that we really are one world.

“That is what this trip brought me,” she said. “The world is an infected wound—if we don’t heal it, it will get worse. As a first step we have to start healing ourselves. Amma guides us.

“I have been an Amma devotee for four years. When I first met Amma, I was like many young people in my country—very self-absorbed, spiritually dull and angry at the world. Since then, with Amma’s teachings and inner guidance, I am becoming more centred in the ways of spiritual life and awake to the need of becoming part of the solution to the problems in the world.

“As I embrace Amma’s insights, I am becoming better able to identify the causes of social issues that are a result of the deterioration of our world. I can see more clearly the source of the problems in my own country as I find them in myself, and work to root them out.

“America is the most powerful nation in the world in its wealth and creativity. But in America, people focus too much of their attention on their material wealth without developing their spiritual life and social responsibility. Ignorance of the Truth is a disease in our world and an epidemic in my country.

“Through Amma’s example and teachings, I see that we must change from within ourselves first, and then become leaders for change through service for the betterment of all.

“As a young person growing up, I see too many people in positions of leadership taking the world in a negative direction. Too many of these leaders are only good at distracting people away from the right course of action towards knowledge of the soul, and leading them deeper into the selfishness of the ego.

“Like many young people, I felt that there was something wrong with this situation. I didn’t really know what to do about it, and I had little reason to even try. I became disenchanted, disheartened and disillusioned.

“When I met Amma, this all changed. She is a perfect example of the positive power of leadership. I also saw other people in the world who are making a huge difference, and I realised that there are many people who want to change things for the better. I began to see that we can take on the challenge of dealing with the problems of life. But for things to change, we have to work for it by getting involved socially, politically and environmentally. Amma is an inspiration and powerful example to all of us to join with Her in this effort. Amma’s mission is an unconditional love-revolution that goes beyond our nationality, religion, race, gender or economic class.”