The Mata Amritanandamayi Math launched its television channel, “Amrita,” on 24 September, 2003, the first day of Amritavarsham50. It was inaugurated by the Honourable Minister of State for Information and Broadcasting, Shri. Ravi Shankar Prasad during the Celebrations’ Grand Inauguration. 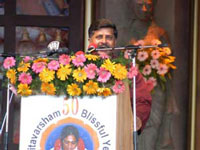 The Amrita channel aims to set new standards in television by celebrating the richness of Indian heritage and culture. The Math has started the channel because it feels value-based programmes are necessary in today’s media-saturated world, which has increasingly been promoting a more materialistic and sensual lifestyle. Programmes with youth appeal will be Amrita TV’s prime focus. In addition, programmes on environmental and health issues will have a place in the channel’s lineup. News programmes will be limited to reporting of factual events.

The network’s managing director and CEO, C.N.C. Pillai, stated, “With the blessings of Amma, we are committed to fulfil all value-based and knowledge-based requirements of society.” He added that Amrita TV will be “free from commercialism and free from gender exploitation.”

The Honourable Minister Shankar Prasad then added, “Information is power, but we have to insure that spiritual information is presented as well, free from competition.”

Renowned Malayalam filmmaker Shyamaprasad has been appointed President of Programmes for the Kerala-based station. Amrita TV will initially be a Malayalam channel; there are plans to include programmes in other languages as well in the future.

It is hoped that Amrita TV will start beaming into television sets around the world on Amma’s 51st birthday, in September 2004.

This entry was posted in Cultural. Bookmark the permalink.