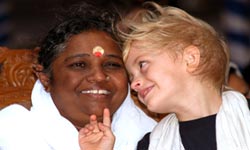 Seven year-old Amritesh was glad to give an interview. “More questions!” he pleaded, wanting to continue talking about the precious time he spends with Amma. Amritesh and his younger brother, Anurup, were participating in the Amritavarsham50 celebrations. 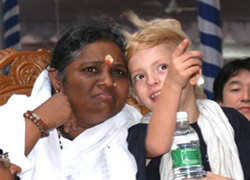 They live at Amritapuri. For the majority of the Women’s Initiative, Amritesh had a prime seat: right on Amma’s lap. Amma did not even ask him to get down as She gave darshan to various guests, simply moving to one side to hug people so that he could remain in place.

Amritesh asked Amma why She wasn’t dancing, as it was Her birthday. She replied “You dance!” Amritesh, who is from Finland, speaks English to Amma. 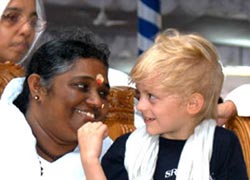 She responds to him in English and Malayalam, some of which he understands. Amritesh often gets to spend time with Amma in Her room at Amritapuri, where Amma has given Amritesh lessons in the tabla and the veena.

Amma taught him the basic rhythms of the tabla and told him that now She has shown him all the movements, he has to practice and use his brain. Amritesh said that he has learned a little bit about loving people from being around Amma, that “the heart is a little bit open.” 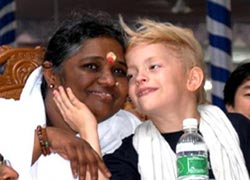 He is happy living at the Ashram and says, “I would like to live the rest of my life with Amma.”