“Children, the President is concerned for the future of our country. Children, all of you know how to run your business. But what is important in life is grace. You may put in your best efforts, but numerous factors influence the outcome. Grace fructifies our efforts. Business is for life, but life should not become a business. The talents given by God are our wealth and the wealth of the world. The greatest disaster in life is not death, but rusting while we are alive. Our President has a dream for India, and all of your should support his vision.”
-Amma

In Amma's divine presence, His Excellency the President of India, Dr. A.P.J. Abdul Kalam, addresses the international assembly of top CEOs on his vision of how to transform India by the year 2020

Drawn together out of their admiration for Amma, their respect for India’s President and their love for their mother land, 132 top CEOs from India and the United States participated in Amritavarsham50’s “CEO Summit.” The summit, which was presided over by the President of India Shri A.P.J. Abdul Kalam and took place in the divine presence of Amma, focused on how to transform India into an economically secure, spiritually strong leading nation by the year 2020. 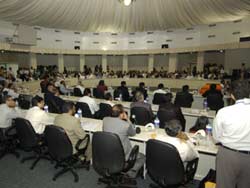 The formal summit with the President and Amma took place on 26 September, but the executives started working on the 25th – resident Indians such as Mukesh Ambani (Reliance Industries), S.P. Hinduja (Hinduja Group) and S. Ramadorai (TCS, TATA), as well as non-resident Indians such as B.V. Jagadeesh (Netscaler), Sabeer Bhatia (Hotmail) and Desh Deshpande (Sycamore).

During this pre-summit, the CEOs were briefed on President Kalam’s “India 2020” vision and “PURA” plan, a proposal for revitilising India through the construction of privately financed rural communities equipped with urban amenities. Pooling their intellects and resources, the executives came up with ways in which they believed they could support and enhance the president’s vision.