Colours of Compassion:
Selected Paintings By 108 Artists From Around the Globe

For Amritavarsham50, the Mata Amritanandamayi Math solicited paintings inspired by Amma from eminent artists around the world. By the time of the Celebrations, more than 125 paintings had been contributed, including 52 by Indian State Award winners and 20 by Indian National Award winners. There were also works by renowned artists from Japan, Bahrain, Austria, Germany, Ireland, Spain, Italy and the United States. During the Celebrations, the paintings were displayed in a gallery for all to see. 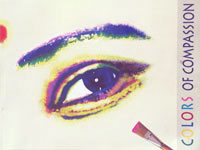 In order to immortalize the gallery, 108 of the paintings were collected in a stunning art book. It was during Amritavarsham50‘s Grand Inauguration that renowned French film director Jan Kounen officially opened the gallery and released the book to the world. Mr. Kounen handed copies to Shri. A.K. Antony, the Honourable Chief Minister of Kerala, Shri. P.C. Thomas, Honourable Union Minister of State for Law of India and Shri. Ram Shankar Prasad, Honourable Minister of State for Information & Broadcasting of India.

As was the gallery, the book is divided into three sections: “Amma’s Biography,” “Amma’s Teachings” and “Impressions of Amma.” In the biography section, the story from Amma’s life that the painting is portraying is included next to each image. In the teachings section, each painting is accompanied by the words of Amma that each artist took his or her inspiration from. Finally, in the impressions section, the paintings accompany a brief description of the concept the artist was trying to capture.

The styles very from Kerala folk styles to abstract paintings to realistic portrayals. And as each human beings relates to God or Guru in the light of their own personal experiences, the perspectives displayed in the book are as many as their creators. Many liken turning through the book’s pages to a meditation on form, and like the slokas of the Upanishads, the images contain both literal and implied meanings worthy of contemplation.