As the assembled crowd waited for the official inauguration of Amritavarsham50, Amma instructed volunteers to hand out hats to protect Her children from the heat of the afternoon sun. “Amma’s blessings,” said one volunteer while he was distributing the hats.

There was a flurry of activity as the Honourable Deputy Prime Minister of India, Shri. L.K Advani, arrived at the stadium. He took his seat on a dais filled with immanent personalities, including Chief Minister of Kerala Shri. A.K. Antony, former U.S. Senator Larry Pressler, Yolanda King (the daughter of Dr. Martin Luther King Jr.), and Shri. Alan Ganoo, Minister of Public Utilities in Mauritius. As the audience waited for Amma, TV news-reader Ms. Neethi Ravindran, who was the Master of Ceremonies for the event, described Amma as “pure spiritual magic that we can recognize but perhaps do not understand.”

Soon after, there was great excitement at the arrival of the celebrity that everyone was waiting to see—their beloved Amma. As Amma walked onto the stage, Her indescribable fragrance wafted across the audience, uplifting the hearts of all of Her children. She was immediately garlanded by everyone on the dais

Swami Amritaswarupananda opened the inauguration ceremonies by chanting Amma’s auspicious Dhyana Sloka. He extended thanks to all for their enthusiasm, love, sincerity and dedication.

“Amma’s wish is that Her Birthday will be used to usher in a new era of peace and harmony. The silent longing of each and every one of you will create subtle positive vibrations for world peace,” said Swamiji. He then went on to describe Amma as the Divine CEO—”Chief Enlightened Overseer”— overseeing the world for spiritual and material transformation. He prayed to Amma, “Please be our guiding light and be with us forever.”

When Swamiji concluded his satsang, the Deputy Home Minister lit the inaugural lamp, as the 100,000-plus crowd chanted “Aum Amriteswaryai Namah.” According to Ms. Ravindran, the lamp symbolized “the sacred and festive nature of Amritavarsham50.” While the crowd waved official Birthday flags, the multi-language Amritavarsham50 theme song was debuted over the stadium’s massive sound system.

Next, all of the distinguished personalities seated on the dais paid homage to Amma, to Her life of love and compassion and to Her many humanitarian activities, addressing those on the stage, the hundreds of thousands gathered at the stadium and many who were watching on TV.

Shri. L.K. Advani said that there are occasions when speeches do not matter—it is the presence of an Enlightened Soul that provides enlightenment. He remarked, “I regard this gathering and occasion as something unprecedented, as people from 191 UN countries have come together. While agriculture energizes, industry enriches and knowledge enlightens, spirituality personified in Amma elevates us.” He further stated that by inviting him, the Mata Amritanandamayi Math has conferred upon him a boon and benediction. He prayed to the Almighty to give Amma many more years for spreading the message of love, compassion and harmony to the entire world. 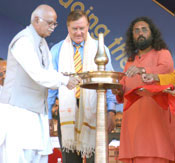 Presiding over the Grand Inauguration, the Honourable Chief Minister of Kerala, Shri. A.K. Antony said, “There is no field of humanitarian activity where Amma’s ashram has not been involved. It is now emerging as the world’s largest charitable organization and the Kerala State Government has decided to strongly support and encourage all the activities of the Math.” He added that Amma has a large and dedicated team of disciples and devotees who are doing yeoman selfless service, which is their real asset.

An exciting new project of M.A. Math received its official launch during the ceremony, inaugurated by by Shri. Ram Shankar Prasad, Honourable Minister of State for Information & Broadcasting. Amrita TV, the Math’s own TV channel, aims to set new standards in television in celebrating the richness of Indian heritage and culture. The network’s managing director and CEO, C.N.C. Pillai, stated, “With the blessings of Amma, we are committed to fulfil all value-based and knowledge-based requirements of society.” He added that Amrita TV will be “free from commercialism and free from gender exploitation.” The Minister further elaborated, “Information is power, but we have to insure that spiritual information is presented as well, free from competition.”

Yolanda King received the first copy of a new ook comprising images and sayings of Amma.

Jan Kounen, a renowned French film director, inaugurated the Colours of Compassion exhibition, featuring 128 paintings by esteemed artists from around the world inspired by Amma’s life, teachings and mission. A book commemorating the exhibition was also released.

Shri. Alan Ganoo, the Honourable Minister of Public Utilities of Mauritius, said that “Amma is an embodiment of love that spontaneously springs from the heart.” As a minister of state, he said that he has always benefited from the wisdom and knowledge of Amma, and that he seeks Her advice in silence and is sensitive to Her divine guidance. He emphasised that his island nation was grateful that Amma opened the first and only Brahmasthanam temple outside India there. Finally he noted that as a minister, he often prayed that politicians be guided by Amma in their daily activities. He called for a transformation in the realm of politics. “Spirituality in politics must become the order of the day. We must stop politicising spirituality and spiritualise politics.”

The Math’s Swami Ramakrishnananda closed the program with a prayer that we should all merge in Amma’s unconditional love.

An aerial view of stadium

This entry was posted in Programs. Bookmark the permalink.