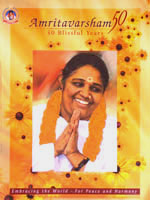 How does one condense half a century of boundless love, compassion and service into a publication? The Amritavarsham50 Commemorative Souvenir is a tribute to Amma’s divine guidance to humanity over the years.

Released during the first day of the Amritavarsham50 Celebrations, the souvenir is a compendium of messages from dignitaries, articles by Amma’s sannyasin monks and householder devotees, and contributions from eminent individuals from every part of the world, all of whom share one thing: their love and reverence for Amma, who has touched and, in most cases, transformed their lives. The 300-page book also contains rare photos of Amma and a collection of 50 of Amma’s sayings on topics ranging from “mahatmas” to “death” to “seflessness.”

The souvenir was officially released by the Honourable Deputy Prime Minister of India, Shri. L.K. Advani, who handed the first copy to former U.S. Senator Larry Pressler, who accepted it on behalf of the world. 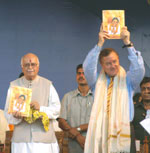 As Swami Amritaswarupananda Puri states in the book’s foreword, “Herein are messages from the President, Vice President and Deputy Prime Minister of India; by sannyasins as well as Buddhist and Christian monks; testimonials from India, the United States, Europe, Japan, Singapore, Australia, Africa and Canada; articles by ministers, justices, governors, CEOs and men of science; by communists and capitalists. Dancers, poets and award-winning novelists have contributed. There are words of thanks written to Amma by those as young as four and those as old as 90. In this dichotomized world of conflicting differences, it represents a miraculous unity—a miracle of Amma, the joiner of hearts.”