In Sanskrit, acharya means “teacher” and vandanam means “salutations.” So Acharya Vandanam is “worshipping, or offering salutations to, the teachers.”

The first day of Amritavarsham50 witnessed a traditional ceremony wherein more than 150 sannyasins and sannyasinis (men and women Hindu monastics) and six women munis (Jain monastics) were worshipped through a traditional Vedic homa. The Mata Amritanandamayi Math’s Swami Amritageetananda and Swami Turiyamritananda presided over the puja, with the assistance of many of Amma’s brahmacharins and brahmacharinis. Swami Ramakrishnananda and Swami Amritatmananda were also in attendance.

The puja took place in a large yagnashala [site of ritualisitc worship] that was specially constructed for this and the many other pujas that were performed throughout the Celebrations. Constructed mainly out of bamboo, the yagnashala was beautifully decorated with garlands and oil lamps. Located in the centre near the sacrificial homa kunda [sacred fire pit] was one large altar, and next to it a smaller one dedicated to Amma. Rangoli [symbolic and decorative designs created with rice powder] graced the boundaries of the temple interior.

As the sannyasins began arriving, selections from the Purusha Sukta [Vedic scriptures worshipping Lord Vishnu] were chanted by Amma’s brahmacharins, brahmacharinis and visiting brahmacharins from the Tantra Vidya Peetham, a Kerala religious institute for Tantric studies.

As the swamis entered, the yagnashala became awash in assorted hues of ochre, the traditional fiery colour of the sannyasin robe, which signifies the “burning up” of body-consciousness and other worldly attachments. The peaceful energy of so many holy people gathered in one place was palpable. After being seated, the sannyasins were given a series of offerings. “Whatever is offered to God, we offer to them,” explained one of the Amma’s brahmacharins. 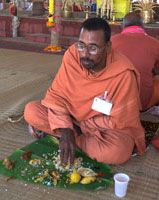 The sannyasins were offered traditional prasad

The brahmacharins then ritually bathed the sannyasins’ feet [pada puja] in a spirit of reverence and devotion, acknowledging them as their teachers and elders in the spiritual path and as representatives of the selflessness and broadmindedness they aspire towards. The sannyasins were invited to stand on small wooden peethams [sacred seats] while the pada pujas were performed. Sandalwood paste and kumkum were applied to their feet and foreheads, and flowers were offered. The sannyasins were then escorted to individual seats. It took an hour to seat them all before the remaining part of the puja could begin.

Tulasi [Indian basil] water, rose water, incense, a lamp, a tulasi garland and the burning of the arati flame were offered to each one individually. Swami Amritatmananda offered dakshina of an umbrella, a bag filled with books of Amma’s teachings and the traditional coin. Finally, a traditional Kerala meal called sadya was served, comprised of several courses and served on banana leaves.

Such worship is done as a means to recognize and attune with the divinity that lies in all beings and forms. And Sanatana Dharma [Hinduism] specifically instructs that we take special care to honour this divinity in the forms of the mother, father, guest and teacher.

One of the brahmacharins in charge explained the significance of worshipping the renunciates: “Sannyasins are the torchbearers of Hindu culture. Hindu culture cannot be separated from spirituality. The sannyasins pass on spirituality to the masses.” In turn, the sannyasins are to be supported by the society that they help to enlighten. It is considered a blessing to give such dakshina.”