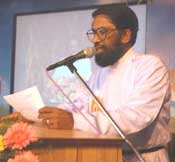 "Christians and every other member of this assembly should be open-minded enough to regard every being as fellow travellers on the same pilgrimage." —Rev. Dr. Ipe Joseph

“Dear fellow pilgrims in the journey of faith and compassionate service. I greet you on behalf of the National Council of Churches in India, the Christian community in India and, above all, in the name of Jesus Christ. We rejoice with you on this very special occasion of the 50th birth anniversary celebrations of Her Holiness Mata Amritanandamayi Devi. We pay respect to the life and witness of our beloved Amma, who is the living symbol of Universal Motherhood. We wish Her abundant blessings from heaven, and long life.

“Through Her compassionate service, Amma is giving contentment and peace. To the Amma who encompasses all beings, animate and inanimate, whom She encloses within the circle of Her loving embrace, I offer a thousand bouquets of flowers in the name of all Christians.
“On Amma’s birthday, I’ll read two lines from a poem that I wrote in remembrance of my mother.

“Amma, mata, ma, aai, taye, tallayai, mother, mutter, mommy:
She is known in a 1,000 names, for She is all these and more.
Fifty years she carried me–
first in her dreams,
then in her womb,
then in her lap
and now in her prayers.
Mother, never dies
She keeps coming back in tender forms of loving care.

“I want to dedicate this poem to you, Ammachi.

“Christian spirituality and service have their basis in the compassionate life and witness of Jesus Christ. ‘God so loved the world that he gave his only begotten son.’ Jesus Christ came as the personification of the love and compassion of God.

“Jesus went to villages and towns and saw the suffering of mankind. His heart was filled with compassion. He felt the burden of their sorrows. He saw they were scattered like sheep without a sheppard. He told them: ‘Come, all ye who labor and heavy laden. I will give you rest.’ He saw a leper and, like our Amma, stretched out his arms, touched him with his own hands and cured him.

“In the village of Bethany, his friend Lazarus died, and he reached there very late, much after the burial. Lazarus sisters broke down and cried as soon as they saw him. Jesus went to the grave. He was moved with compassion, and he wept, and out of that compassion emerged the divine power, and Jesus ordered Lazarus to come out, and the dead man came out alive from the grave. So the life and witness of Jesus is the foundation.

“And then what is the Church doing? In the expression of his compassion and love, Jesus went much above the barriers of religion, caste and gender. He talked to the Samaritan woman with compassion and understanding at the well where she came to draw water. Amma stands for equality of men and women. Jesus really did find equality in men and women. So talking to a Samaritan was going against the culture of the Jews. Jesus was a Jew and talking to a Samaritan was breaking the barriers. And Saint Paul continued to say, writing to the Church in ‘Apostles,’ he says, ‘The compassionate service of Jesus has made such an impact on the integration that it has broken down the middle wall of partition between the Jews and Gentiles.’ So the disciples of Jesus went all over the world with a ministry of love and compassion.

“As we all know, 2,000 years ago, Saint Thomas, a disciple of Jesus Christ, came to Kerala. Thereafter many more followers of Jesus came throughout history.

“Now the Church is trying to follow the teachings of Jesus. Some of the mundane expressions of the integration service of the Church are the hospitals, the schools, the colleges, the destitute homes, the land for the landless, the houses for the houseless programme. The Church has always reached out to the less-privileged like Dalits. There are more students of other faiths who are trained in the schools and colleges of the Church than Christians themselves. In the hospital-care system, committed medical care and nursing care is given to all, irrespective of caste and creed. So these places of services form areas of integration.

“The most recent area of compassionate service is the care of patients infected with HIV/AIDS. The Church has taken the initiative, and I see this as an area where all religions can work together in compassionate care. The compassion of the dedicated workers surpassed the stigma and isolation of this dreaded disease, which is HIV/AIDS.

“Christians and every other member of this assembly should be open-minded enough to regard every being as fellow travellers on the same pilgrimage.

“Then, a similar kind of attitude also is expected from fellow pilgrims of other religions. Then together through interfaith relationship, we can strengthen the activities of compassionate service, then life will get more importance than religion, then the worth of human beings will not be measured by the riches they possess, but by the compassionate service they render.

“So, let us struggle together to make it possible. We thank You, Amma, for the leadership and initiative You are giving to us as a model of this activity and my final blessing is: lokah samastah sukhinu bhavantu [May all the beings in the world be happy].”