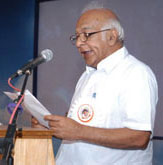 "It is commonly believed that in Semitic religions, the male dominance is a divine dictate. This is not the case." —Joseph Pulikkunnel

“Pranams to Amma, who has transformed Herself into the amrita [nectar] of love and compassion for the world through Her actions. Though She was poor by birth, Amma has liberated the materially and spiritually poor with Her compassionate touch. Though She did not have an opportunity to get an education when young, She has made the whole world a vidyalayam [educational institute], teaching them the lesson of love. To that Mother, I offer pranams befitting a Guru.

“I humbly request you not to clap your hands whatever be the provocation because that may rob of that time, and lunch is nearing.
“Brothers and sisters, Motherhood is the total concept of creation, protection and love. It is an expression of all that is good in human existence. It elevates women to the sublime heights. In the concept of Motherhood, sex disappears as an identity factor. Motherhood is an all-embracing spiritual ideal overriding biological reality of humans. The distinction between a man and woman is biological, social and mundane. The dominance of man over woman is a sociological phenomena and due to historical reasons. Authority structure in any society is a reflection of the challenges that a society is called to face. During the tribal and agricultural period, and even in the early industrial period, muscle power was all-important for livelihood and survival. Naturally, this brought about the rise of male power in tribal and agricultural and industrial society.

“In all ancient societies, religion was an important factor in the social life of people. The understanding of the Supreme Being by a people tended to be production of the social system wherein they lived. Today, there are two main families of religions in the world. They are Semitic religions—which comprise Jewish, Christian and Muslim religions—and the Indian religions. It is commonly believed that in Semitic religions, the male dominance is a divine dictate and women are degraded in society on religious reasons. If one delves deep into the scriptures of these religions and interprets it in the historic context of the establishment of these religions, one may find that this is not the case.

“In the ancient tribal system, man was the leader of the tribe. Old Testament Bible narrates the history of Jews during the tribal period, wherein muscle power was all-important for survival. Naturally, man became dominant in that period of history. In the later part of Jewish history, women are found engaged in the affairs of the State. Judith and Ester occupied the centre stage in the Jewish history during the Persian occupation, 5th century B.C. Judith, having killed the Persian general, and Ester, by destroying the Persian plot to exterminate Jews, came to be accepted as the saviours of Jews. The entry of women in Jewish history shows a developed change of human status in society. There was no provision from Jehovah against women entering into political life of the nation. Recently, Israel had a woman prime minister.

“By the time of Jesus, founder of Christianity, the Jews were again a settled people in Israel. Jesus’ social intervention edified the women. He violated the then Jewish social rules and included women in his [group] though it invited acrimony from the contemporary society. [Three women are] explicitly shown at the foot of the cross and at the tomb on the day of resurrection. While all His male disciples fled at His capture, women stuck fast to Him till the end.

“Koran, the basic scripture of Islam, also takes a very lenient view of women compared with the contemporary society. Mohammed, the Prophet of Islam was born and brought up in the Arab tribal system where women were treated as a sex commodity and a liability. But Koran openly declared the equality of human beings. Any social reform has to be viewed in the background of the contemporary social reality. When we look at the reform brought about by the Prophet on the status of women in Arabia, it is amazing. It was a great change towards creating an egalitarian society in the Arab tribal system. The divorce rules he enacted are comparable to the modern law. But the unequal treatment now measured out to women in Christian and Muslim society is a product of imperial Christianity and imperial Islam.

“Wherever the patriarchal family system became dominant, God is a male. The Goddess concept in such a religious milieu became rare. Wherever Goddesses are a part of the celestial demography, the importance of women in society was usually accepted. The concept of Goddess in the celestial demography is unique in all Eastern religions. Goddess in Eastern religions is a symbol of fertility, protection and love. No civilization in the world developed Goddess worship so elaborately as in India.

“In Keno Upanishad, the ancient scripture of India, there is a narration of the appearance of Brahman, the unqualified Supreme Being, before the devas, gods, in the form of an unidentified spirit, a yeksham. The devas could not identify this spirit, and they sought the help of Agni, the God of Fire, and Vayu, the God of Air, the most powerful of gods. They challenged the spirit but failed. Then they sought the help of Indra, the presiding god, but he also could not identify the spirit. Finally, he sought the help of Uma, the daughter of the Himalayas and the spouse of Siva, and she identified the spirit as the Brahman.

“In this short narration, Keno Upanishad points to the innate power of women to decipher the unknown even where the others fail. I am happy that Amma could decipher the Brahman as love and point out to the world that this is really Brahman, not the Supreme Being dwelling in heaven.

“Human thought process is usually and traditionally reflected in the religious concepts. In Indian tradition, the God manifests as arthanaarisvara, half-man and half-woman. This points to the equality of man and woman in heavenly demography as visualized by human intelligence of the Indian Rishis. The concept of the supreme is a production of man’s social living and social need. In most of the ancient Eastern religions, goddesses are equal to the gods, sometimes goddess become more important than man. Human civilization has past the tribal, agricultural and industrial periods and enter cybernetic era of human history. In the democratic society, muscle power has been pushed to the background, and brainpower becomes the tool. Naturally, the woman has a very important and equal role to play in modern society. Fatherhood and motherhood concepts have to be integrated in the religious and social thought process, and the world should move along the footprints of arthanaarisvara. Amma—whom we felicitate here as a symbol of Motherhood—by karma [action] has shown the way for humanity in Her address in Geneva.