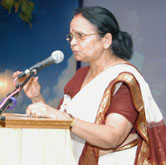 "When Brahma created the world, he was worried who would look after the world. Then he created a mother. So we have to treat them as special." -Mridula Sinha

“My pranam to our Amma and all sisters and brothers who have come to attend this Love Conference, Conference of Love.

“We all know that we have come to render our pranam to Amma and to take vow, to take vow to change the world. We all know that day after tomorrow is the 50th birthday of Amma. We have to celebrate in a different way, and we are standing on the bank of Arab Sagar, Arab Ocean.

“I came yesterday, and I am seeing the gathering, the people, and my heart says that this gathering, this ocean is Mother Ocean. So can we take a vow, can we change the name of Arab Sagar [Arabian Sea], can we rename the sagar into Mother Sagar? “Because day after tomorrow, the birth of an idea, an old idea, old Indian idea in a new concept of the growth of Motherhood. The birth will be of an idea. We have got the vibrations, the touch of Amma, why you have not to preserve, to restore, the vibration to touch of Amma. You have to spread it. You have to mix your love also in that, and we have to spread it.

“This is a coincidence – day after tomorrow India will begin to celebrate Navaratri, Matripuja for nine days. And we all know that in India itself, there are so many nursing homes, where everyday the girl-child are not allowed to be born. So the change of idea, the change of message, we have to begin with, from that day only. You know I write something and I am the chairperson of Central Social Welfare Board, so my organization is for promoting volunteerism. We all have gathered here voluntarily, so this is also an ocean of voluntary workers. You have come voluntarily. So this idea also, to treat our girl-child as mother, the symbol of embodiment of motherhood, we should spread this idea all over the world.

“We have studied the problems, the abuses, of the society, and we have come to know that the mindset of the people should be changed. Every volunteer worker, every religious worker should change the mind-set of the people. The time has come when we have to change.

“So I have given a call: sing a song when the girl child is born.

“And I am very happy to report you that the ladies have started singing the song. I have given a call.

“When I met Amma 10 years before, I have gone through all the literatures and I have given a call on 10th of December, the Human Rights Day: treat every woman as manaavi, human being; and every village should have maanavi samaan bhoj [feast in honour of women]. You should treat your girl also as a maanavi. She is also human being. Start from that point, and people are changing. It is a good sign; now the people are listening to us. And I think now we have got together here, that things will change.

“I am a writer of Hindi, I write in Hindi, I have said:

“‘Let the mother be born. Let the girl-child, the mother, live. Let this not stop. Give them education, give them everything. And when she will become a human being [an adult], she will give everything she has been given.’

“There is an ancient anecdote: When Brahma created the world, he was worried who would look after the world. Then he created mother. This is an anecdote. So we have to treat them as special, visesh.

“When I asked our Prime Minister, Atal Behari Vajpayeeji to give a message for a woman souvenir, he gave his message and he writes in Hindi but I would like to say in English only: ‘All those who are out to render women into men in the name of equality deserve ridicule. Women must remain women, made of flesh and bone as they are. They should not be trivialised as puppets, not looked upon as fairies, alienated from the soil of the land. Woman by nature is mother.’ So this is the message of Prime Minister of India. He’s also thinking in terms of Amma. So when the politicians and the mother, like Amma, will think in a same way, the change will come and we are hoping for the change.

“Thank you very much for inviting me. Falling down at Amma’s feet and praying, I want to assure you that in times to come the idea of Universal Motherhood that Amma has raised and is promoting, with the help of voluntary organisations and society in general – is so great that it will engulf a whole ocean. I end this talk of mine assuring you that I will contribute my drop-like effort to this oceanic endeavour of Amma.”