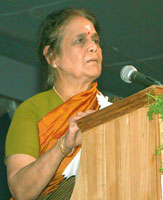 “Women in the Workplace: Increased Visibility Is Not Enough”

“Pujya Sri Ammaji, the Honourable Assembly, swamijis, and religious preceptors, assembly and the colleagues. I am going to start this with a quotation; it’s actually a description, in 1905 a Muslim woman born in a high-class Bengali family brought up in UP wrote, as her dream, called Sultana’s Dream. Her guide in that book asked the question:

“‘”In their proper places, where they ought to be.”‘

“This was written by Rokeya Sakhawat Hossain, with no disrespect intended for men, but it reflected the state of our society at that time.
“There are many of my friends here, honourable Najma Heptulla and Yolanda Scott King, whose mother I had the opportunity to nominate as the Ambassador to India, and quite by accident, three days before I came here, I found a letter among my files in which Mrs. Scott Coretta King, Martin Luther King’s wife, wrote this letter to me: ‘Dear Mrs. Srinivasan, I wanted to let you know how much I thank you for nominating me for being the Ambassador to India. You know how much the influence of Gandhi affected the life of my husband and his works. It would be, indeed, a great honour to serve in an ambassadorial relationship to India….’ But she goes on to say she would not at that time accept that if it were offered to her because she was concentrating on the [King] Center for Conflict Resolutions and Non-violence [sic]. I would like to simply read some, in terms of the time that is allotted to me.

“With esteem I offer my pranams to Pujya Sri Ammaji, as I begin my thoughts on what eminent achievements may lay ahead for those who have already distinguished themselves by their work, service and commitments to producing wealth, technology, education, health and happiness for the service of humanity. In striving to achieve these goals or higher order of ideals—whether they are welfare, peace, freedom, dignity or Self-realization—dreams are essential. Dreaming alone will not be a sufficient condition for the achievement of any goal. As one of our famed film producers, Ishmael Merchant, would tell us, ‘In order to get anywhere in life you have to make everybody believe in your dreams.’ Sounds simple enough. The arts, science and business of selling dreams require unique sensibilities and stamina.

“Women have come to their own place in some areas of work—for that matter, to every other place. Hopefully with confidence to give and take and, even more importantly, to stand up for what really matters, what truly defines her as a woman—namely, her humanity. Attiya Dawood, a young Pakistani woman poet, a Sindhi poet who’s translation I am reading, declared:

“‘For bread and home
She has refused to accept
a life doled out as charity.
Her reins
She has tried to snatch away
from the hands of others.
Considering herself to be human
She has demanded the right to choose.
She wants to live.”

“When the chains have been shattered, a new reality of what is possible is no longer caged in ideologies of man versus woman, the manager versus worker, the old versus young and the affluent versus the deprived. The achieved woman is more than a mentor; she is a powerful change agent. Lest we might forget, let’s remember what Amartya Sen tells us: ‘The effects of inequality impoverish women as well as men.’ The special responsibility then involves that the women leaders create a critical mass of leaders to usher in change.

“While great strides have been made, by leaps and bounds beyond our dreams, a vast majority of us remain not far from where we had started, and some even in retrograde. Women in many cases are still being viewed as dinner companions, often personal issues against women show up in their work-related evaluations. Just a few years ago, a women entrepreneur was told that she would be better off starting a restaurant rather than going around trying to raise venture capital for her start up company. I am going from here to the CEO Conference, and I am going to raise this issue. This particular woman recovered and went on to win big, but not before breaking down.

“Many of us have known great support from our families, and we face our second shifts at home with a lot of help either from our families or by contracting hired help, where again we subject other women to what we would not tolerate for ourselves. The higher order of concern for our children, aging parents, familial tranquillity, and community obligations, no doubt, suffer when women are trying to perform high-wire acts. But should this not be the concern of the couple and not just the sacred duty set aside for women alone? Should not society owe women the opportunity to excel in whatever their choice of vocation, whether at home, in society, or in the wide world? Societies where a degree of robust and sustained achievements had paved the way for informed citizenry, caring and emotionally secure civil society and ecologically designed sectors bestowing health, wealth and fulfilment, women have made major contributions by their work, insights and, most of all, by their leadership. The gender equality paves the way for a huge qualitative leap in the lives of nations.

“I was privileged, in the early ’80s, to host in my home, the world’s first woman cosmonaut, Valentina Tershkova, scientist, at that time the highest-ranking women member of the Polit Bureau of the erstwhile Soviet Union. As she sat in my kitchen savouring my culinary productions, she was telling us about her space travel:

“‘From my Soyuz, I watched the little blue planet floating in the cosmos, and I was overcome with motherly instincts. I looked at our earth as a mother looks at her tiny baby, helpless but completely trusting that the Mother would protect and nurture. Compassion and love overwhelmed me. When I returned to the earth, I touched the Siberian soil with love and gratitude!’

“One of India’s strongest advocates for women’s freedom and progress in every aspect of life, including religion is Swami Rangathananda, the president of Ramakrishna Mission. He is a repository of every branch of knowledge: scientific, sacred and secular. His analytical and rational approaches to knowledge make him one of the greatest thinkers of our times. And he often, with great respect, quotes Betty Friedan, especially a quotation from her second book, The Second Stage, from where Swamiji quotes the following:

“‘The second stage has to transcend the battle for equal power in institutions. The second stage will restructure institutions and transform the nature of power itself. Those of us who have struggled against prejudices of various kinds know that new clothes on old skeletons do not render institutions efficient in delivering equity and fairness.’

“Our prime minister has asked us not to tell him that we are super-achievers, we are super rich, super powerful, super IT [information technology], etc. etc. He said, ‘Tell me that all our girl children are going to school.’ Mahatma Gandhi declared that he was uncompromising and irrational on the question of women’s rights and felt that women should not suffer any constraints not suffered by men. Women’s health and her position in society and at home and in the work place leave much to be desired.

“Sometime back, I read a newspaper caption about the state of human health in poor countries: ‘The real killers are poverty, ignorance, fear and corruption. Disease just administers the coup de grace.’

“Here we face the biggest obligation to humanity. As mothers and nurturers, and now with our emerging roles in the wealth and power sectors, we can make the biggest difference long-awaited. With the arrival of women in global corporations, in the words of Peter Drucker, ‘Clearly, the most important economic instrument (my addition: social instrument as well) the global company requires new structures (to me that means: ‘more women’) new methods of integration and new relationships.’ Sri. Amma has given us instructions that we think constructively, so we go to work in the positive outcomes we take from here. In that spirit, I offer two challenges, which I hope we will consider:

“The first challenge is self-directed to us women: Even while we grieve and rage over past injustices, we must recognize that blame-game does not get us anywhere. We will remember the words of the guide who tells Rokeya Sakhawat Hossain in 1905: ‘You have neglected the duty you owe to yourselves (she is talking to women), and you have lost your natural rights by shutting your eyes to your own interests.’ So we will begin our work here. The first order of business then is to have the strength and stamina, acquire knowledge and seek wisdom, and know our work by its purposes. After all, it is not know-how but know-what by which we determine the purpose behind why we do what we do. We have been chartmakers, researchers, paper presenters, but we know to conceptualise. Therefore, we know to manipulate better human futures.

“The second challenge is to this inspired, dedicated and committed Summit and to the august body of achievers of tomorrow’s CEO Summit to set up a unique venture that will help great women achieve great women power where ideas will be valued in the creation of great human futures. Of course, we will turn down no good ideas just because they come from men! As Swami Ranganathaji would exclaim, ‘What a beautiful idea that is!’

“I will personally lead the effort, and with the blessings of Sri Amma, our Gurus and well-wishers and through exemplary commitment and relentless work, we will deliver—please take note.

“The revolutionary poet Subramania Bharati anticipated the new women of India and envisioned the women and men of India would:

“And he is emphatic when he declared, that the women and men of India:

“‘…Shall reach the Moon
Research and traverse the Cosmos.'”

“The translation is mine.

“And that prophecy came to pass in the form of Kalpana Chawla, among others, from a small place near where Krishna gave the world the Bhagavad-Gita. In Kalpana, the ‘American Promise’ and the ‘Indian Dream’ came together. Even as she was consigned to something sublime among the rising suns, I remembered, another occasion, when John Dobson—a distinguished astronomer, founder of the San Francisco Sidewalk Astronomers and a profound student of Vedanta—quoted the following verse from a homeless woman:

“I offer my many thanks for your patience and indulgence. I end my thought offerings with pranams to Sri Amma, the sadhus here, the assembly and all my colleagues. Thank you very much.”