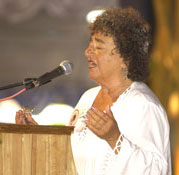 "Amma has taken me to the next stage which is to experience Shekhinah in the heart and through the heart." —Rabbi Leah Novick

“The Feminine Face of God: Nurturing its Reflection in Men and Women”

“‘Shelter me under your wings (and)
Be my Mother, my Sister
May your bosom be a nest for my head (and)
The place for receiving my prayers.’

“This is a poem from Chaim Nachman Bialik who lived in the late 18th century and wrote in Hebrew. And it’s evidence I believe that no matter how patriarchal a tradition seems, we never forget God the Mother.
“For centuries, Jews have been praying to come under the protection of the Shekhinah, the Divine Mother. Our ancestors, Abraham and Sarah, also the ancestors of Islam, welcomed new souls into her winged protection; and our traditional prayer for the dead, the kadish, asks that the compassionate deity shelter the departed one under the Shekhinah’s wings.

“Shekhinah is defined by our commentators as “she who dwells within, within the heart.” In the Torah, God says to us: ta asu lee mikdash v shachanti b tocham. ‘If you will make a sanctuary for me, I will come and dwell within you.’ So, Shekhinah, according to our sages, is God’s immanence; the ‘Divine Presence’ that we can feel and experience in the body, relate to here on earth, and find in Nature, because She rests also on the rocks, on the plants and flowers and, of course, on the animals as well as us.

“When the ancient Israelites were nomadic, that experience of Shekhinah in Nature was very dramatic. She appeared first as the Oceanic Birth Mother when they went through the Red Sea. Not in the Cecil B. DeMille version but hopefully in their hearts. She then guided them through the desert with ‘Seven Clouds of Glory,’ probably what rests over Mount Shasta. She then warmed them at night with ‘Pillars of Fire,’ and She feed them magical food referred to as manna, a kind of spiritual tofu.

“When we became more sophisticated, instead of carrying her everywhere in an arc, we had to build a huge Temple in Jerusalem. The Talmud says that when the temple was completed, the Shekhinah lived there, and all of its walls were lined with love—very much our experience when we go somewhere where Amma stays for awhile. But our temples were destroyed, we were dispersed and our Prophets, particularly the Prophet Jeremiah, saw the Divine Mother garbed in a heavy black robe, sitting at the Western Wall and weeping for Her children. With unconditional love, She left Her usual dwelling place. Although, of course, She is ubiquitous and lives everywhere, but the foundation myth is that She followed us into exile, particularly in Persia. And that She became available to us and to all human beings everywhere in the world.

“And I would like to emphasize that even though our Shekhinah is sort of ethno-particular or particular to our civilization, just as Lakshmi, Saraswati, Durga and so on are particular to the Vedic tradition, they are available to all.

“Our Sages taught in the Talmud that the Shekhinah rests on whoever comes together to study and pray. In our tradition it’s the menyon of 10 but even in the Talmud, the rabbis say any place the people gather to study and pray, the Shekhinah will rest on them. She comes to all those who give charity, even the person who gives one coin to a beggar and She lives with those who extend hospitality, especially to strangers.

“Conversely—and remember this was written between the 5th and the 7th century—the Talmud says, ‘Violence, rape and incest forced the Shekhinah to leave the earth and ascend to the seven heavens,’ for She always has that option. Just as Amma makes the sacrifice of being here on earth with us, our rabbis taught that we have to pray for the Shekhinah to want to be with us on earth.

“Despite all these beautiful teachings, Jewish women remained second-class citizens who were not allowed to sign contracts, initiate divorce proceedings or serve as witnesses in religious courts. They had few ritual obligations, mostly those connected with home ritual, and they were excluded from religious leadership. There were a few of them that got to study formally, but the formal study tended to be male and, over the years, the Shekhinah became the province of elite scholars; and in that process, became increasingly abstract and philosophical.

“The Kabbalistic mystics saw visions of a beautiful, young Shekhinah in full glory with lots of emeralds and diamonds and rubies and they re-opened the gateway to the Divine Mother. Mostly in the 17th and 18th century, they began to speak of her as the ‘Sabbath Queen,’ which is a tradition maintained all over the world by Jews and they described her specific places on the ‘Tree of Life’ with both literature and poetry.

“At the same time, their wives and daughters who they were considered the Shekhinah’s representatives, were not allowed to raise their voices in sacred song. The sound of a woman’s voice in Judaism was considered lascivious. Women provided the labour for important ceremonial life, but were not counted in the public prayer quorums or called to the Torah until recently. They had an intimate relationship with the divine; but their wisdom as healers, herbalists, midwives and nurturers was not taught formally and, unfortunately, most of their teachings were not published.

“Great Masters, like the Chasidic Masters, the miracle workers of Eastern Europe, had great respect for women’s insights and also taught their congregations, their followers, their devotees, that the most important thing we can do is to pray to bring the Shekhinah back to earth. However that devotional path was lost for the last few hundred years with the advent of modernity, and the impact of the European holocaust. Twentieth-century women like myself, despite a very elaborate Jewish education, came to adulthood with no awareness of the Cosmic Jewish Mother. We may have had jokes about the dysfunctional Jewish mother but we didn’t have much insight about the submerged and un-taught Great Mother.

“With the resurgence of feminism in the 1970s, and the influence of the larger Goddess Movement, many of us went looking for the feminine face of God. Many had visions and dreams, and we turned inward as other groups of women did to rediscover the Goddess in ourselves. Women’s New Moon groups emerged, and the struggle for the ordination of women rabbis and cantors. We’ve been getting ordained in the liberal movement since the ’70s and in the conservative movement since the mid-’80s. And the influx of women, mostly very young women, brought a great deal of energy and artistic creativity. Women now can become bat mitzvah [Jewish ceremony wherein a girl is accepted as a woman and a responsible member of the religious community] at 12 years old, and women can be prayer leaders and so on. The feminine voice of God, what we call the bat kol in Hebrew, was heard again and began to permeate Jewish culture, opening people’s hearts.

“And the thing that has been the most encouraging for me in all of this history is seeing in a period less than 30 years, how the North American and British Jewish community, have truly opened their hearts to the women leaders and that process has begun in Israel and in Europe as well. The ’70s brought a lot of political action within Jewish life. And much of that in the secular political area.

“Amma has reminded us, particularly in the UN speech, of how much remains to be done, and that is true in all of the religious traditions.

“In general, religious leaders that incorporate the divine feminine in their services and in their public discourse remain the minority. Male liturgical language and old images are still the norm. And the possibilities for teaching children and youth about the divine feminine are still in their infancy. And we have been very blessed, and continue to be blessed, that Mother has emerged during this later part of the 20th century and travels around the world, showering us with Her unconditional love, as She continues to do here.

“Our presence is a testimonial to the universal and eternal nature of that love and the divine presence that Amma embodies. I am especially grateful that Amma has given me the gift of direct experience of the Divine Mother. For myself, it has been 13 blissful years, and this June in San Ramon I celebrated my bat-mitzvah with Amma. Thirteen amazing and miraculous years. And I am so grateful that I have been helped to go beyond the texts. For me, it was very important to rediscover the Shekhinah in the traditional texts, in the traditional commentaries. I write about Jewish women who are like bodhisattvas [a Buddhist term indicating one who has achieved enlightenment], and there was a desperate search to be able to bring this reality through the text. But Amma has taken me to the next stage which is to experience Shekhinah in the heart and through the heart. So I thank Her from the bottom of my heart, and I thank you.”