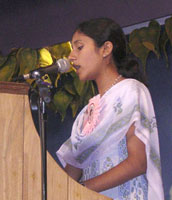 "The way I think, my attitude towards my studies and my personality as a whole are all a result of growing up having Amma as my guide and Guru." —Gayathri Somnath

An overview of the 20-year-old AITEC student’s Amritavarsham50 Youth Summit speech on Amma’s impact on her life.

Gayathri grew up in the United States and during Amritavarsham50 was in her final year of studies at Amma’s AITEC Computer College in Coimbatore. She originally had intended to study biology but, at Amma’s suggestion, switched her focus to computers. In her speech, she explained how following Amma’s advice taught her that there is no reason to worry about the future because Amma is taking care of it all the way.

“From the moment I met Amma as a small child of 10 years till the present, my life has been filled with these experiences,” she said. “If Amma had not come into my life, I am positive that I would not be the person I am today. The way I think, my attitude towards my studies and my personality as a whole are all a result of growing up having Amma as my guide and Guru.

“I was brought up in the United States, and if it had not been for Amma, I would have completely lost my Indian identity. Growing up in a culture completely opposite from my own was an emotional battle for me. I had to choose between fitting in and doing the right thing.

“Through this conflict, I realised that Amma was not only my Guru, but also my true friend. If I had any problem at school, I would write about it to Amma. Whatever the problem was, I would find that either it would be solved or I would gain the emotional strength to ignore it. From this, I knew that She was there with me every step of the way, making sure that I made the right decisions.

“Naturally, I did make a few minor mistakes, but Amma’s words taught me to look at these mistakes in a positive way and to learn from them. Only because of Amma’s grace was I able to retain my culture and my individuality without giving in to peer pressures.”