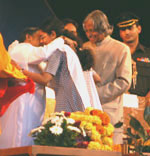 Jayasree S. split the first prize in the senior category. Here, she receives an embrace from Amma and her award from the President of India.

Nature is the most beautiful of all in this universe. It is a unique gift, which no other planet except earth has received. The beauty of nature is so well balanced and independent. How many poets have written on the beauty of nature? Even in our earliest works we find remarks about the rare gift of nature.

In today’s world, we find discussions going on for protecting nature from damage. We learn in school about the damage being inflicted upon nature and what role we can play in protecting it. But is it true that we protecting the nature? Or it the nature which protects us? In my opinion, the latter is more true than the first.

Let me present before you some of the interesting facts that support the topic given. Most of us would be familiar with the word “ozone,” which is a layer of the atmosphere. This layer protects us from the harmful radiations of the sun’s light, such as the ultra-violet rays. Is this not the weapon of nature to protect us from any danger?

Let us take another example. We know that there are certain greenhouse gases, such as carbon dioxide, in the atmosphere that trap the sun’s heat and keep the earth warmth. If these gases were not present in the atmosphere, earth would have been a cold planet. There would not have been any life on earth.

The atmosphere not only keeps the earth warm, but it also prevents excess heat from entering the earth. About 53 percent of the total heat touching the atmosphere is reflected back into space. Besides this, a part of the remaining heat is absorbed by the water bodies and landmasses. This helps in maintaining reasonable temperature on earth, thus supporting the existence of life on earth. 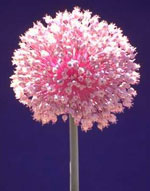 "Our forefathers divided the material world into panchaboothas and protected these elements of nature by considering and worshipping them as devatas. Only if we follow their path, will we start to truly protect nature."

Yet other examples are the various cycles of nature, such as the water cycle, carbon cycle and nitrogen cycle, by which nature protects us. These cycles help in ensuring the availability of these important elements necessary for life. It is impossible to think of a situation where there is no water or oxygen present on earth.

Can we imagine a situation where there are no decomposers? The earth would be filled with dead bodies of not only human beings but also plants and animals.

Do you know why nature has chosen the two poles of the earth to be cold? If the poles were as warm as the rest of earth, then all the ice caps would melt and the whole earth would be under water. It this were to happen, what would come of the entire human race who call themselves as masters of this world?

There are yet numerous examples of how nature protects us. Evolution and adapting are two such examples. When we study about the theory of evolution proposed by the great scientist Charles Darwin, we understand what type of organisms nature chose to survive and what to be made extinct. It is really wonderful the ways provided by nature to us for adapting to a new climate. One of the simplest examples is the darkening of our skin colour during summer. Why? It is to protect us from the heat of the sun.

Nature provides us certain characteristics that help us to survive in a particular area. For instance, the people living in the tropical areas are darker and shorter than those in the regions further away from the equator. Nature provides these characteristics to animals and plants too. The cactus plant in the desert is given long roots to be able to absorb water from deep under the earth. Similarly, the polar bears have thick fur to protect them from the biting cold of the polar regions.

What wonderful organ systems nature has given us! We have a digestive system for digesting the food we eat. We have a well-developed nervous system and brain, which help us to and discover many things to make our life comfortable. We have an excretory system to prevent the accumulation of wastes in our body.

Such wonderful characteristics nature has provided us to protect us from various problems. But don’t you think that we are misusing them? The extensive cutting of forests has led to the extinction of animals. It has also caused a decrease in rainfall and an increase in global warming. The reckless mining of earth for natural resources, such as fossil fuels and mineral ores, has resulted in irreparable damages to the earth.

The polluting of soil, because of improper disposal of plastics wastes, limitless use of fertilizers, pesticides and other chemicals, is also a problem of serious concern. The discharge of untreated effluents from industries and lack of proper sewage-disposal systems have led to waste pollution. The fumes from factories and automobiles, and the harmful gases produced by burning fossil fuels has resulted in air pollution.

Though nature is trying its best to protect us from danger, we, in turn, are harming it rather than protecting it. Our greed and selfishness has led to serious threats that can damage the entire earth. The misuse of science and technology to produce atom bombs, etc., is a factor of serious concern. If we continue to exploit the various resources of nature at this rate, the possibility of life on earth after a few years is at stake.

But it is not yet too late. Even if we try now, we can protect nature, which has protected us all these years from many dangers. Our forefathers divided the material world into panchaboothas [five elements] and protected these elements of nature by considering and worshipping them as devatas. Only if we follow their path, will we start to truly protect nature.

As mentioned earlier nature is the best gift giving to us by God. He, in turn, expects us to protect it. Though nature has its own way of protecting us, we shouldn’t indulge in activities that can destroy nature. In conclusion, it is nature who protects us, but it is also our duty to preserve it in return. Therefore, let us work together to protect our nature and not cause any more damage to it. Only then can we say that we, the human race, belong to this wonderful gift of God.