A treat was in store for dance fans early in the morning on the second day of Amritavarsham50. Two of Kerala’s traditional dance forms were performed by two different Malayali troupes.

Kanniarkali, an old traditional dance, was led by a male troupe from Palakkad. Usually held in Bhagavati temples during festivals, this performance began when a group of 11 men first bowed to the musicians and then to the audience. They were attired in deep yellow dhotis trimmed with maroon borders. Vibrant red head scarves, traditionally worn by men of that area, complemented the costume.

The dancers formed a circle around a large temple lamp on the floor. The musicians played a folk song in worship of Bhagavati, the Goddess. The lead musician sang the refrain while the others responded in chorus. As dancers held tulasi leaves and offering sticks in their hands, they twisted legs and hips forward to the centre and backward, executing alternating arm swings to the rhythms of drumbeats, cymbals, and song. Within a few minutes the tempo picked up, garlands swung, and feet stamped. The dancers glistened with sweat as they raised their arms and twisted their legs to an ever-increasing beat. Slowly they stopped dancing but continued to walk in a circle. One of the musicians entered the interior of the circle and also walked around initiating a dialogue with individual dancers. After a short time, the musician left and they danced another piece. The second was similar in choreography but performed with more energy and with a staccato beat. 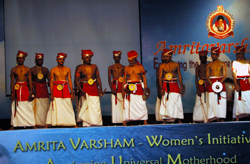 The other dance group performed Velakali, which first appeared around 250 years ago in the Ambalapuzha area of Kerala. This dance represents wars that were fought on land and sea. The troupe of 14 male dancers, arranged in two rows, were accompanied by five musicians who played drums, cymbals, horn, and wind instrument. Dressed in white dhotis and red turbans with gold ribbons across the front, each man held a shield in his left hand and a decorative curved stick in the right. 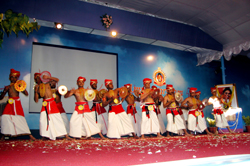 They wore multi-strand malas with a large medallions and arm bands. As the music started, the two lines slowly moved to the front of the stage in unison, at the same time creating circular arm motions and leg bends. Shields twisted to the rhythm of the drum, each catching glints of light and scattering beams across the stage. 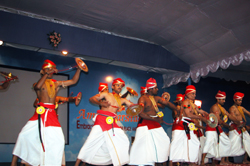 The second selection was almost identical to the first except one man danced a solo in front of the two lines executing leaps and hops that looked like a tiger chasing its prey in the jungle. During the finale, the men shook their shields and ran off stage.