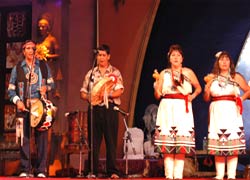 The Native American dance troupe known as the Tewa Dancers From the North, from New Mexico, U.S.A. performed for Amma on the main stage on the evening of the 25th. Their dance is considered a prayer and a duty, performed to help the seasons flow and to bring harmony to the universe. They feel as a people that they are an integral part of nature, no more significant than all other elements like the plants, animals, sky, sun, moon, and mountains. 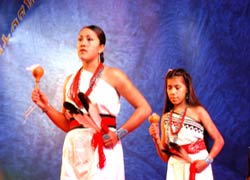 The group offered two different forms of worship: the Eagle Dance and the Women’s Pueblo Dance. The shows the motions of the eagle—how it glides, how it feeds its young. At the left side of the stage, two male elders began beating a steady rhythm on hand held drums while they chanted in their native language

From the right entrance, three woman and two girls slowly made their way in a long line to the center of the stage. Their deliberate movements included knee bends in place while each rhythmically shook a rattle held in a right hand and two eagle feathers in the left. Amma appeared entranced as the women gracefully offered their dance. They then glided a step before repeating the same sequence in a repetitive pattern. The women and girls’ faces revealed an introverted gaze. Their native attire was a simple white tunic and pants decorated with colorful geometric borders and a red waist sash. 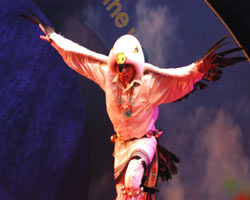 Three young men dressed as eagles then glided onto the stage.Three young men dressed as eagles then glided onto the stage. They bore a remarkable resemblance to eagles, because they wore on each arm an elaborate wing made of eagle feathers and a head mask complete with eyes and beak covering most of the head and face. They were dressed in white shirt, leggings, and waist cloth embossed with multicolored geometric patterns. A bundle of turkey feathers gathered at the waist hung at the back. The women shook a rhythm out with their rattles while the “eagles” jumped and bounced, spreading their wings in graceful motions. The dancers created the illusion of flying and soaring in the sky.

After their worship, they received darshan from Amma who hugged the smallest one first for a very long time. They all came with open hearts and tears in their eyes and appeared very grateful and humble to be in Mother’s arms.