The reggae bhajan group from the U.S.A., led by Sulma, one of Amma’s American daughters, bridged many cultures. The group is a large one with electric guitars, tabla, snare drums, saxophone, harmonium and lots of singers with a lot of energy. Sitting with friends from Granada, Spain, I happened to glance at some Indian schoolboys sitting three rows in front of me. They were clapping in time with the beat. I looked to my left and noticed a middle-aged Indian lady doing the same. To my right, it looked as though a few of Amma’s Western children could no longer contain themselves; they jumped up and began dancing to the beat.

This was beginning to remind me of an outdoor rock concert I had attended at Golden Gate Park in San Francisco in the late 60s. At this point, I decided maybe I’d better get up and explore. Within a few minutes, the crowd of dancing Westerners had swelled. I wondered what Amma’s Indian children were thinking. At first I saw expressions of surprise. I walked away to get a more panoramic view. I spotted the Kokiriko Japanese folk dance group bouncing down an aisle, waving their white, tassled sticks to the reggae beat. They were beaming with joy, dressed in their traditional bright blue and white kimonos and ukatas. 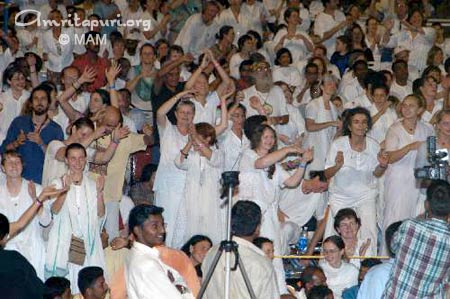 Increasing numbers of Westerners were waving their arms, clapping hands and snapping fingers in the air as they expressed themselves freely through movement. Five Rajasthani women from Jaipur, dressed in colourful village attire, wanted to join in. They had been escorted by one of the men of their clan, but when they reached the dancing masses, shyness took over and they started to retreat. But the man encouraged them to turn around. Even though they had pulled their bright red veils over their heads, I could see the women peeking out with big smiles. Before long, they were clapping, hopping and swinging with their Western brothers and sisters.

As the tempo increased, I looked over and saw huge crowds of Indian men and boys joyfully clapping to the beat. I saw an enormous photo of Amma standing with Her arms reaching for the sky, a white dove in Her hand, and that wonderful smile of Hers looking out at me. Amma was bringing Her children together through the universal language of music. May the contagious nature of joy that Amma brings into our lives never vanish. May we radiate and transmit this joy the world over!