This evening, American actress and environmental activist Ms. Linda Evans and Malayalam cine star Padmashree Mohanlal formally inaugurated the Amritavarsham50 cultural celebrations with passionate words in support of Amma and Her mission. These cultural presentations include traditional music, songs, dance and other art forms. In their capacity to showcase cultural diversity and nurture awareness of other cultures, they are nearly unparalleled.

As events have begun to unfold here at Amritavarsham50, it has become obvious to many that even introductions and brief talks about Amma’s work by devotees can convey both informative and articulate words that speak directly from the heart. This was very much in evidence with both guests this evening. Ms. Linda Evans spoke first with some brief and inspiring words. Commenting on the eclectic mix of indigenous performers from Africa, Malayasia and Peru and other nations, she said, “ We are all celebrating the world as one family with one mother.” In doing so she stated, “We are affirming the beauty of diversity.” 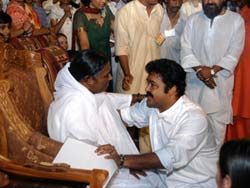 Padmashree Mohanlal’s words were lengthy and passionate in his support for the cultural arts and Amma’s path of love. As an actor Mr. Mohanlal is famous for playing a wide variety of roles. Elaborating on the arts, Shri. Mohanlal drew his inspiration from the rich cultural history of India, “where the arts are divine in essence and are god’s gift to the world. They have rhythm, harmony and beauty, all aspects of the divine.” 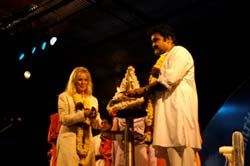 After their remarks, Ms. Evans and Shri. Mohanlal together lit the inaugural lamp onstage signifying the divine love of Amma. She later received them both with Her sweet and tender embrace. They sat with her Her some time watching the presentations. 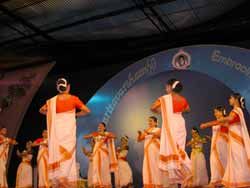 The first event of the evening’s cultural presentations was an elaborate and monumental dance performance featuring over 90 dancers. The dances integrated many classic Kerala dances forms including mohiniyattam, kathakali, theyyam and other styles. This performance was perhaps the most uniquely diverse event held so far simply because it was so challenging in its scope and size. The complete stage, all three sections lit by over 100 lighting instruments were utilised throughout the presentation. 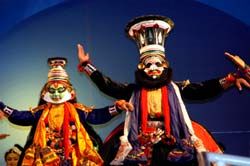 Dancers wore elaborate and multicoloured costumes—from the black, gold and orange dresses worn by the thiruvathirakali dancers to the huge headdresseses of red and gold attached to the theyyam dancers who performed with flaming torches to the traditional ballooning dresses of the kathakali and Krishnanatham dancers.

The dancers wove in and out in choreographed patterns with precision and grace as a specially composed bhajan-like score of polyrhythmic percussive and eclectic melodic sounds fluidly elevated the momentum of the sculptural movements onstage. 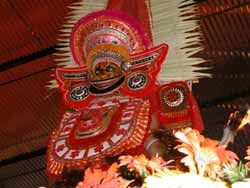 The audience was visually and musically transfixed as they were transported through the history of Kerala dance in this wonderful fusion of classical forms all taking place in the presence of our divine Amma.

As we continue to witness these cultural performances from around the world at Amritavarsham50, it is becoming increasingly obvious what rich and plentiful cultures exist among all the peoples of this planet. Amma is bringing all these cultures together in one place to show us the beauty and magnitude of her creation. 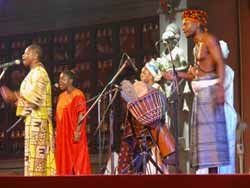 Pan-African Ensemble’s “Zen Oyem,” (Walking Towards the Light), spiritual music from Cameroon and the Ivory Coast, was joyous in its simplicity and stark power. Four female vocalists backed by a drummer using traditional African instruments (who later played an electric guitar) took the stage and immediately inspired the audience.

Their deep, rich voices and stark drumming and percussive beats resonated throughout the stadium as their voices rang out with the sounds of their native language. As one of the singers remarked earlier in the day “I’m not singing for myself, I’m singing for Africa.”

After several songs one woman took the lead vocal to sing a mesmerising and passionately devotional African-style rendition of Amma’s bhajan,“Adi Parashakti.” The moment was so precious and sublime as the spiritual music of Africa seemed to merge with that of India, bound together by Amma’s universal love and grace. Afterwards the group performed a variety of rhythmic and uplifting songs reinforced by the unique sounds of the African drum. Their music brought the entire Western audience and many Indians to their feet as they danced, clapped and cheered to the music.