On the second day of Amritavarsham50, two monks from very different Buddhist sects performed an integrated homa [fire-pit ritual] based on the esoteric Buddhist practice from the Shingon tradition.

Tendai Buddhist Rev. Takeda Hakusai said, “The homa tradition does originally come out of India, which spread to China and then to Japan. The homa is meant to burn up egoistic desires and to purify the mind. Basically the only difference between the Japanese homa and the Hindu puja are the materials that are used for the fire.”

Takeda Hakusai, who is the chief abbot of the Saikyouji Temple in Kyoto and a senior disciple of Sakai Yuusai Dai-Ajari of Heizan, said this unique coming together of monks from two different Buddhist sects was a result of Amma’s grace. “We first met at Amma’s Japanese programme this past year in Tokyo and now for the second time in India at Amritavarsham50.” 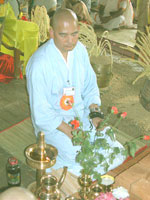 Takeda Hakusai was invited to the Amritavarsham50 Celebrations to represent Buddhism in the Interfaith Summit, which took place on 24 September. Early in the morning before the summit, he sat around the homa kunda [fire pit], telling his mantra beads, as the Hindu priests performed their Ganapati Homa.