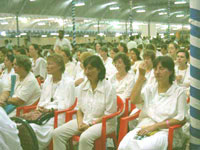 At 5:00 a.m. on 24 September, Amritavarsham50 opened in the main pavilion, Amriteswari Hall. More than 10,000 devotees were in attendance to take part in the morning prayers. The Mata Amritanandamayi Math’s Swami Amritageetananda performed the traditional arati, waving a burning camphor flame before Amma’s photo and offering flower petals.

After the opening prayers, the crowd repeated Amma’s Ashtothara Sata Namavali, the 108 names of Amma composed years ago by the famous Kerala poet Ottoor Unni Namboodiripad. This was followed by a chanting of the Sri Lalita Sahasranama, the 1000 names of the Divine Mother.

Taken from India’s ancient Brahmanda Purana, the names describe Devi’s forms, attributes, virtues, abodes and stories of Her greatness. The poetry of many of the mantras is stunning its beauty. For example, the 18th name: “Salutations to the one whose eyes possess the lustre of the fish that move about in the stream of beauty flowing from Her face.” But devotion is only one aspect to this sahasranama, which is chanted every morning at Amma’s ashrams. The Mantras often revel in the wisdom of the Upanishads, such as the 254th name: “Salutations to She who is meditation, the object meditated upon and the meditator” and in the science of the Tantras—name 475, “Salutations to She who resides in the mystic centre of the throat.”

In chanting these names, concentration is gained and one’s mind and surrounding atmosphere is purified. Amma also says that in any household where the Lalita Sahasranama is chanted every day with devotion, there will never be a lack of food or basic necessities.