“150,000 people to be fed in one and half hour” were Amma’s instructions. The task seemed impossible, but with meticulous planning, devoted volunteers and Amma’s grace, it went off without a hitch.

The kitchen at Amritavarsham50 had to prepare food in a manner so that 150,000 people could be fed in one and a half hours

To get an idea of the enormity of the job of feeding all the people who came to Amritavarsham50, one need simply look at the amount of food that was used: 85 tonnes of rice, 115 tonnes of assorted vegetables, six tonnes of salt, 30 tonnes of potatoes, 15 tonnes of milk, 11 tonnes of sugar, 50 tonnes of semolina and 1,200,000 papadams [fried flatbread]! 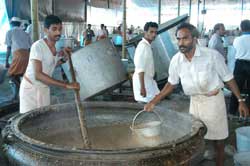 A team of 1,800 volunteers went into action under the leadership of two brahmacharis and one householder devotee. This trio did not sleep more than three hours a day during the four-day celebrations.

The food, as per Amma’s instructions, was given for free to one and all. People queued up to get their food at 200 food-serving counters. There was also 50 canteen counters around the stadium providing Indian and Western snacks, such as pazhumporis [fried bananas] and veggie burgers. 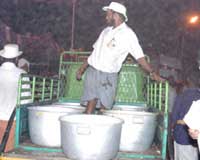 The canteen serving counters were continually restocked with food from the kitchen via 25 open-bed mini-trucks. As the distance between the kitchen and some canteen counters was quite far, a satellite distribution centre was also set up.

Six massive temporary huts—totalling approximately the square footage of a city block—lined the road near the Amritavarsham50 Stadium. They housed the various cooking teams. The cooking was done in vats big enough to hold seven grown men.

This incredible operation never would have worked were it not for the immense love of the devotees for Amma, and their desire to serve Her and the world.