Fire, Security, Medical:
Amritavarsham50 Was Ready for All Emergencies 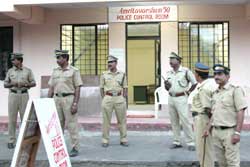 3,500 police constables and and 400 officers were on duty

With more than 100,000 people—plus hundreds of VIPs—coming to the Amritavarsham50 Stadium everyday, the Ashram had to make sure there would be adequate emergency resources.

Fortunately, despite the huge crowds, there was never a need to avail of the security and fire departments stationed on hand, and all the health problems the emergency medical teams encountered were minor.

In addition to a security crew of well-trained devotee volunteers, there were 3,500 police constables and and 400 officers on duty at the Amritavarsham50 stadium.

There were also five 24-hour First Aid Hubs conveniently located around the stadium. These Hubs provided general first-aid and evaluation. A full hospital, manned by physicians from AIMS, was located near the front entrance of the stadium. There, full facilities—including cardiac-arrest rescue equipment—were available.