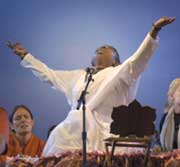 In order to outfit the Amritavarsham50 stadium with adequate sound and video, the Ashram located a system that had last been used for the legendary hard-rock group Deep Purple. The total output: 80,000 watts.

“This is a unique sound system in India,” explained Didier Weiss, the sound engineer who’s company rented the system to the Ashram. “It was used for a concert of Deep Purple in Bangalore some months ago, and it comes from the U.S. It is a system worth 50 million rupees, but we rent it cheaply for Amma.”

Indeed, the sounds system was impressive just to look at. Huge towers of speakers were erected on either side of the stage. And two more towers were set up in the centre of the stadium grounds. The system ensured that everyone inside and outside the stadium was able to hear all the words, the music, the blissful silence—with crystal clarity. 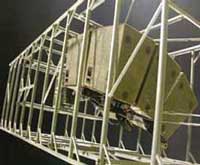 Four towers of speakers were erected throughout the stadium

“We have done lot of big shows, but nothing like this before,” said Vijay and Michael, sound-and-light specialists from Bangalore. “We are stunned at the magnitude of this event.”

“Doing this for Amma is something special,” said Didier. “In Her, I see what I came for and found in India. She represents the unity of mankind. The One Truth. Amma is, for me, a leading bright presence of this Truth. She is much more than Her physical presence.”

Sound was not the only concern for those arranging the Amritavarsham50 Celebrations. In order to make sure all of the devotees were able to see all the different events going on over the four days, a massive closed-circuit TV system had to be installed.

Two-hundred-fifty TV monitors were situated throughout the stadium and stadium grounds, including in kitchens, canteens, medical centres and other utility services. There were also four giant screens set up inside the stadium, which stood as tall as the towers of speakers. These insured all the devotees could clearly see Amma as She was giving darshan—even those in the far-back of the 100,000 crowd.