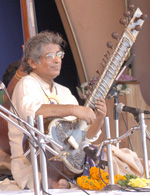 Adorned with the Padma Bhushan Award for his contributions to classical sitar, Pandit Devabrata Chaudhuri, popularly known as Debu, is one of India’s most outstanding musicians. Panditji began playing when he was just four years old, making his public debut on All India Radio at 12. Panditji is now in his 55th year of broadcasting and continues to thrill audiences all over the world, on the air and live in concert.

Panditji is the former dean of the Faculty of Music & Fine Arts at the University of Delhi, where he taught for 40 years, training several contemporary maestros. He is considered the foremost exponent of the gharana tradition, and is the respected creator of eight ragas. His books on Indian classical music are regarded as key works, and he has lectured and taught widely at universities throughout the world.