Amma Gives a Piece of God

Amma Gives a Piece of God to All

Welcoming all of Amma’s children from around the world, Amma’s chief disciple, Swami Amritaswarupananda Puri, shared with them his thoughts about Amma after spending 24 years at Her side. 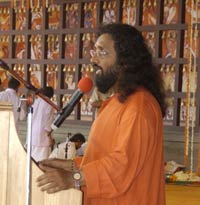 "Amma is the greatest miracle that has ever happened in my life. I don't want another miracle, because I haven't experienced this one enough."

“We are fortunate to witness one of the greatest events of our times. This is a landmark in history,” he said, referring to the Amritavarsham50 Celebrations. Then, Swamiji thanked Amma’s children for their help in carrying of the event.

Referring to this as a true meeting, Swamiji said the meetings we are used to are nothing more than a meeting of bodies, not hearts.

“What happens when two rivers meet?” he asked. “They merge, disappear and become one.” He then added that what is needed today are meetings that erase differences.

Describing his past 24 years with Amma as a wonderful journey—one of “immense sacrifice and infinite love,” he pointed out that, for Amma, there was no journey; She has always been there.

“‘After 24 years of close association with Amma, you must understand Her so well,’ some people say to me. Most expect me to give a big ‘yes.’ However, my answer is a big ‘yes and no.’

“If I say that I don’t know Amma, that is incorrect because I feel as close to Her as I do my own heart. On the other hand, if I say, ‘Yes, I know Her so well,’ that too is wrong because I don’t know who She really is.

“Amma is the greatest miracle that has ever happened in my life,” he said. “Now I want to proclaim to the entire world that I don’t want another miracle—because I haven’t experienced this one enough. And it will never be enough. As I keep marveling at the infinite power and wisdom that remain hidden behind Amma’s diminutive form, Her presence evokes an unquenchable thirst, an intense longing within me to know Her more.”

Swamiji then went on to explain how Amma is providing us with everything we need in life: from homes for the homeless, to pensions for the poor, to education and medical care. But the most precious thing that Amma is giving us, Swamiji explained, is “a piece of God.”

Swamiji concluded his speech by comparing Amma to Lord Krishna. “Both Krishna and Amma were born with beaming smiles on their faces. The Lord’s countenance was ever-blissful with that soul-transforming smile of supreme detachment. One can behold that same profound smile on Amma’s face as well. Literally working day-in-day-out for the uplift of humanity for the past 30 years, Amma, with Her irresistible smile and warm embrace, has transformed hundreds of thousands, and She has transformed hundreds of thousands more in the years to come.”

This entry was posted in Amma, Speeches. Bookmark the permalink.