Women and men are not two but one. Like the two sides of a coin, they are different aspects of the one Truth. Women can do many things that men cannot. Likewise, men can often do what women cannot. Their dharmas [duties] are complementary. Seeking social progress without women’s progress is like trying to fly with only one wing. 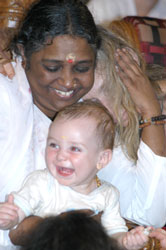 Men have more physical strength than women. But this strength is not for oppressing them, but for protecting them. This does not mean that women are weak. Protecting them is our social responsibility.

Men should not turn society into a one-way road that permits only their advancement. Society should become a highway that gives equal freedom for women to progress.

Today, the husband wants to control his wife; the wife wants to rule her husband. This is egoism. In such a situation, there will be no unity. Only in love can there be unity. Women must become the strength and support for men, and vice versa.

Women have been blessed with a boon that no one else has—motherhood. If men continue oppressing women, saying that they are weak, one day women will explode. This will lead to a huge calamity. Many wives are turned out of the house if the gold or money [of the dowry] is slightly less than that stipulated by the groom’s family. This should not be condoned.

Even in Western countries, women are often paid less than men for the same job. Not only that, after reaching a certain position, there are few prospects for promotion. In sports too, women are not given equal remuneration as men. Many women with professional careers in the arts are often not allowed to continue working after marriage, by their husbands. Because of all these, one day, women will explode. The harmony of society will then get upset, as it would during the final dissolution. Even in Western countries, men are not prepared to “come down” to the level of women. They live at the level of the intellect. To stitch a piece of clothing, both the scissors of the intellect and the needle of the heart are necessary.

Mothers are partly responsible for the plight of women today. Instead of repeatedly reminding their daughters that they are female and are unequal to males and thus conditioning them, they should permit girls to grow in self-confidence. They should prepare their daughters to work on par with men. They should endow them with vocational training. The love that children get during their childhood paves the way for their mental and physical growth. Just as the body needs food, the soul is nourished by love.

Women too should pay attention to certain matters. Today, many Indian women wear trousers and jeans. There is nothing wrong with that. But they should not lose their values. They should imbibe the samskara [cultural values] of Indian women and the manliness of Western women. Sorrows will not end by choosing to dress as one likes or by choosing to be with the man that one prefers all in the name of freedom. Bliss comes from within.

Along with rights, one should shoulder responsibilities. When we do justice to both, we can bring about social harmony.

Amma is not a feminist. She is just stating facts.

This entry was posted in Amma, messages. Bookmark the permalink.