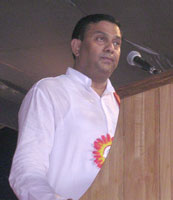 Dr. Srikant Jichkar is an extremely dedicated and highly educated scholar. He has spent 18 years in higher studies and has 20 post-graduate degrees to his credit including a D. Litt in Sanskrit, the highest degree possible. The Book of Records lists him as the most qualified political person in India and his personal library amounts to 52,000 books. At the age of 25, Dr. Jichkar entered politics as a Member of the Legislative Assembly of Maharashtra. He was the youngest minister MLA at that time and subsequently held 14 portfolios. He was a member of the Upper House of the Government of India for six years.

In 1999, he left politics to dedicate himself to various educational ventures to promote Vedic studies. He founded the Sanskrit university Kavi Kulaguru Kalidas in Maharashtra and was its first chancellor. At the time of Amritavarsham50 he was working on several projects: establishing volunteer services in remote areas, coordinating the work of the Dharma Samstha Pramukh Sabha and setting up a traditional Gurukulam (traditional Vedic school) on 400 acres of land in a forest near Nagpur. He was also the president of the Maharashtra State Marathi Encyclopedic Production Board.