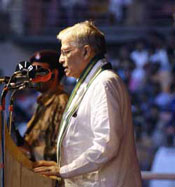 At the time of Amritavarsham50, Dr. Murli Manohar Joshi was serving as India’s Honourable Union Minister for Human Resource Development, Science & Technology and the Department of Ocean Development.

One of the top three leaders of BJP (Bharatiya Janata Party), he is a scholar, scientist and a mass leader. His early association with RSS instilled in him a purpose in life, a passion for the mission to rebuild India and protect its heritage.

Dr. Joshi was born on January 5, 1934. Dr. Joshi had his early education at Hindu High School, Chandpur and completed his higher education from Meerut College and Allahabad University, where he was inspired by some of his teachers who used to encourage students for supporting freedom movement. Tilak’s Gita Rahasya had a strong influence on him. RSS leaders like Guruji Golwalker, Deendayal Upadhyaya and Professor Rajendra Singh played a major role in shaping Murli Manohar’s political thinking. Specialising in spectroscopy, he was awarded Ph.D by the Allahabad University. Writings of Vivekananda and Aurobindo had a strong influence on his ideology.

Even during his over four decades of political career, Dr. Joshi pursued his academic life at Allahabad University. He inspired and guided scores of students to take up science research before he retired as Professor and Head of the Physics Department.