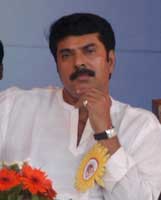 From his childhood, Padmashree Mammootty had a burning desire to be an actor. So intense was his ambition that he prayed to God to help him succeed in his quest.

His performances have garnered national awards and accolades and even international praise. He says his it is his desire to portray characters and situations that will have some effect on people and the way they live their lives. Concerned about his social responsibility as an actor, he believes film has the power to effect social change. He is also a patron of the Pain and Palliative Care Clinic of the Medical College Calicut, Kerala.