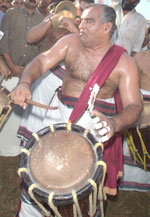 Shri. M. P. Sankara Marar, popularly known as Mattanur Sankaran Kutty, is one of the most proficient artists in the traditional temple music styles of chenda melam, thayambaka and panchavadyam in Kerala. In 1973, Shri. Marar started the Mattanur Panchavadya Sangham, which is now one of India’s most popular performing troupes in the field of temple music.

In an effort to preserve and revive temple arts, Shri. Marar serves at the Asthikalayam Centre training students of chenda. He has won many awards and fellowships for his work. In 1996, he was honoured with the Kerala Sangeetha Nataka Academy Award for his contributions to the art of chenda playing. He has been regularly performing internationally since 1979.