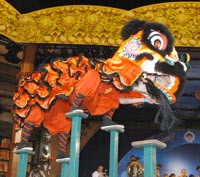 The Wong Low Shen Shee Temple of Malaysia was established in 1967 to honour three deities of different faiths: Wong Low Shen Shee (Buddhist), Song Lau Koon (Taoist) and Hanuman (Hindu). Wong Low Shen See was an extremely generous, fair, compassionate and loving emperor who lived in China about 5,000 years ago. Temples are still built to honour him, and to carry on his life’s work of helping the poor. The Wong Low Shen See Temple authorities carry out social work, healing and teaching the unity of humankind. One of the temple’s activities is to teach the Lion Dance to young people and so safeguard the tradition. The temple’s dance troupe has performed in Taiwan, Hong Kong, Mauritius and Australia. Over the past 20 years, they have won many Lion Dance competitions, including the Malaysian National Championship Award in 1990.

The origins of the Lion Dance can be traced back to China in 205 B.C. when it was performed during religious festivals. The lion is considered a holy animal, and it plays a central role in Chinese mythology. The lion chases away evil and safeguards the people. When performed well, the Lion Dance is believed to bring good luck and happiness. It is always an intrinsic part of important festivals such as the New Year celebrations and other grand events.

The lion’s body is supported by two dancers, one of whom handles the head, the other the body and the tail. Three musicians play a large drum, cymbals and a gong. The head dancer moves the lion’s eyes, mouth and ears to express the moods of the dance. The musicians must be extremely attentive to one another in following exactly the lion’s moods and expressions. A little Buddha (Chinese monk) teases the lion with a fan or a giant ball. This denotes good luck. Before the troupe performs, they ask for protection from the deities, and pray to all four directions for guidance and blessings. The dancers are skilled in the martial art of kung fu; the dance requires intricate footwork and complete agility.