Carvajales, a Flamenco group, came all the way from Granada, Spain to perform at the Amritavarsham50 Celebrations. Flamenco is a style of Spanish guitar and percussion music performed with a lone female dancer. It was made popular in the cafés of Spain in the 1920s. The group took the stage twice during the four-day affair. Here, some of the group offered the impressions of Amma, the Amritapuri Ashram, India and spirituality in general.

What is your feeling upon coming here? 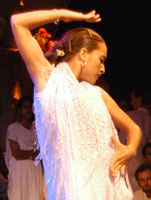 Carolina Morales (dancer): “The feeling here [in Amritapuri] is total peace. I can’t explain it—it’s an inner sensation I have.”

Rafael Lozano (bass guitarist): “The people give caring and love to others. People are very sympathetic with others. It’s very easy to connect with the people here because they are simple people, not complex.”

David Heredia (flamenco guitarist): “In Europe, I have many things to do, and everyone is always in a hurry. When I came to India, I felt inner peace. When I arrived at the Ashram, it felt like home. I perceive a great deal of good energy in India. I look at many poor people, many mud houses, but the energy is very different than Europe. People are happy here. Nevertheless, there is misery, and the people are poor. It is possible a person has only one banana in a day, but he is still happy.”

Juan Masana (percussionist): “When I first came, I noticed that people greet you. It made me feel welcome. In my city, everyone looks down at the ground. In the Ashram, it’s not just the temple. The site is very special. In my life, I’ve never seen coconut trees. I have a very organized, busy life at home. I like that, in the Ashram, people take the time to meditate and do spiritual practices.”

Ana Belén Sola (singer): “The feeling here is good because the people cultivate what is essential for life, not what is materialistic. I like it here a lot.”

David: “Amma makes many good things for India. Before receiving my hug and blessing at the Ashram, I didn’t believe anything about this. I thought it was a normal embrace. It seemed like nonsense to receive an embrace. But I had an open heart, so I bought a garland for Amma and put it on Her. Then She embraced me. Amma talked with me in Malayalam. She knew that I was Spanish. After Her darshan, during my first seven steps, I felt like an electrical current had hit me. I was walking like a spiritual drunk. Now I know the embrace is special.

“I am a free person and am not attached to any religion. I feel the most important thing is the relationship between people.”

Do you have any birthday message for Amma?

Carolina: “Thanks for letting us come here.”

Rafael: “Thank you, Amma. This trip is the first step to my dream life. I want to visit the world playing my bass guitar. It’s a good first step coming to India.”

Ana: “Thanks for the stay here. I’m impressed with Amma’s energy, that She has physical contact with the people without food or anything to drink. I remember during the Inauguration that I was able to sing for one minute with three other people, one from Ireland, one from New Mexico in the United States, one from Iran. This performance represented the peace among the countries. The song was sung in four different languages.”