In the Field: Math Builds Homes in Ambalamugal, Kerala

The location seems inhospitable: a steep, muddy hill at a 60-degree incline, a few miles away from Cochin’s oil refinery. But as with the other places Amma has sanctified, miracles seem to be underway here.

The land donated by the Kerala State Government in Ambalamugal posses some challenges for construction. The Math must build on levels, reinforcing each with rubble to prevent mudslides during the monsoon

Under Amma’s guidance, Brahmachari Premamrita Chaitanya has been in charge of building Mata Amritanandamayi Math’s free Amritakuteeram houses. His current task: completing 100,000 houses by 2012. He walks and talks fast. He has to: the speed with which the houses are coming up is breathtaking. From 1998 to 2002, the Math built 25,000 houses across India. In order to meet Amma’s goal of 100,000 more houses by 2012, the Math must double its productivity to 10,000 houses every year. It is here, in the village of Ambalamugal (close to Tripunitura, 40 kilometres southeast of Cochin), that the Kerala Government donated some two and a half acres for the Math to build Amritakuteerams upon—a venture inaugurated by the state’s Honourable Minister of Law, Shri. K.M. Mani, during the Amritavarsham50 Celebrations.

While the acres in Ambalamugal may not look conducive for construction work, the Math does not regard them as wasteland. “This is God’s land!” says Br. Premamrita. 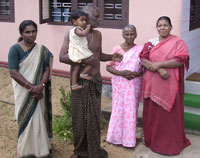 The neighbours of the housing colony are happy about the development: "It is God’s blessing. God created a house for the birds and the animals, so why not for these people?"

But initially, the going was not easy. “I asked five architects to come up with a plan for the site, but none of them thought it was possible to build here,” he says. “Then I asked Amma for Her guidance and meditated on it. That inspired the plan to build on different levels.”

The development work is complex. Roads have been cut into the hillside. Seven roads must converge. Also, a specially designed rubble foundation must be created to prevent mudslides during the monsoon when the area is hit by three meters of rainwater within a month. At the bottom of the hill, workers have dug two water-collection wells to ensure that rainwater does not flow away. A specially built filter system will give villagers cheap and pure drinking water.
Br. Premamrita discloses other details. “We are building 108 houses here. The whole process takes about six to eight weeks. We have 500 to 700 workers on site. We must work fast to meet the goal: there are 140 plots of land to build houses on [throughout Kerala] and so many poor people waiting for a house. We are now looking into whether we can build more, maybe 150 houses.” The cost of building here is high because of the additional expenses incurred to make the site more amenable to construction. The houses cost about Rs. 50,000 to 60,000 each.

More than 5,000 families have applied for the free houses. The brahmacharis from Amma’s ashram will carefully sift through the applications to ensure that those who need most will receive. “Most families have incomes below the so-called poverty-level of Rs. 1,000; some hardly make Rs. 200. These people are so poor that they can only afford one meal a day. Widows, the handicapped and the elderly get preference.” The Math also ensures that each housing colony includes people from different religions and castes to prevent a colony from being typecast as “untouchable.” 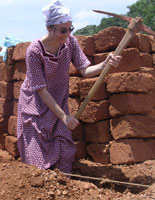 A devotee from the West volunteers her time to help in the construction.

The Math also guarantees all maintenance for 10 years. For the first seven years, the houses are “leased” free of charge, during which the occupants are not permitted to sell the house. Thereafter, they are given ownership of the house and the land on which it stands, provided they are not in trouble with authorities like the police.

All houses get one electricity point to ensure lighting at night. If the residents want more, they may apply for it in time. The Math also installs many water-points close to the houses. To ensure income for the inhabitants, the Math is also helping to set up cottage industries, like needle work, spice-grinding and household production of dairy products and pickles. “We want to give them a life, not just a house. Amritakuteeram is about giving people a real chance to build something for themselves,” says Br. Premamrita.

Besides houses, each housing colony will feature a community centre, bookstall and dispensary. “We are not just building houses; we are creating a community. This will bring people together. We also give them what they need.” To underline his point, Br. Premamrita shows me a picture of a mosque that Amma built in one of the Math’s housing colonies in Gujarat. “Now, this is selfless service: building a mosque. Have you ever heard of any other religious leader building a place of worship for people of another faith? This shows the greatness and selflessness of Amma!”

Next to the building site are beautiful villas belonging to the site’s prosperous neighbours. How do they feel about having 108 slum-families as new neighbours? “Let’s talk to them,” says Br. Premamrita.

We go to the nearest house and knocks. An elderly man opens the door. Seeing a brahmachari, he prostrates. Br. Premamrita smiles and gently pulls him up on his feet again. The gentleman’s name is Kesavan. He is a retired chemical engineer. He invites us into his living room, where his wife and daughter serve us lime juice. He brushes aside questions on whether he is worried about his new neighbours. “It is God’s blessing. God created a house for the birds and the animals, so why not for these people?” he asks.

Is he afraid they will steal or that the value of his property will depreciate because of their presence? “I have no fears,” he says. “It could work the other way: they may become more wealthy now. God does not make anyone a thief; circumstances do. So, by changing the circumstances, we can create an opportunity for people to change themselves. It is the duty of society. We cannot neglect them. We must inspire and educate them if we can. I am very happy that Amma has created this opportunity for me and my family to be part of this noble work.” 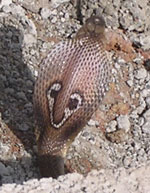 A cobra is found at the construction site.

Among the volunteers working on the housing project are 20 Western devotees, who are serving for a day. They took the three-hour bus ride from the ashram to help with painting, moving bricks and digging trenches for the drainage pipes. It is hard work and most of them are perspiring profusely. “It feels good to be here,” says Michelle, a French national. He puts down a brick to show me the blisters on his hand. He is clearly moved by the experience of working on Amma’s housing project. “In a way, it is like having Amma’s darshan. I feel Her presence so strongly here. I am really grateful for the opportunity to be a part of this project.”
Barry is a veteran Amritakuteeram volunteer from Australia. Two years ago, he decided to spend his holidays in Gujarat, when he heard that Amma was rebuilding the villages there. “I spent three weeks there. It was the most wonderful time of my life.”

For Paula, too, this day trip was a reminder of the two weeks she spent in Gujarat: “There, I really had the feeling that I was contributing something. Maybe we could not work as hard or for as many hours as the Indians, but the fact that we were there, that we could work together with these people was such an inspiration. For the villagers, it was the feeling that somebody really cared for them, and for us, it was like being part of Amma’s family, a project to bring us all together.”

While walking around the building site, some of the workers beckon to Br. Premamrita. He walks over. “Look, Shiva has come,” he says, pointing to a small cobra next to some rubble. Workers place a big stone on its tail so it cannot get away. The poisonous snake is swaying, its hood spread out, showing a white “V.” Br. Premamrita holds a pipe before it. It seems to stare into the dark hole of the pipe and then, after some hesitation, slides into the pipe. Br. Premamrita quickly seals it and takes it to the canteen where he releases the snake into a plastic jar. The cobra is now clearly visible: beautiful but poisonous. Later, it is taken away from the site and released far away from human habitation.

Amma’s sankalpa, the government’s land, the efforts of Amma’s children, the neighbours’ goodwill and Shiva’s darshan. They all augur well for the new residents of Ambalamugal.