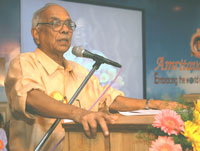 "'All roads lead to Rome' is not spoken only of the city of Rome; it is much more appropriate while referring to the omnipotent, the omnipresent, the omniscient God." —Shri. P. Parameshwaran

“In the light of Hindu religious principles, religion as a means, not a hindrance, to social and political peace and mutual tolerance”

“This wonderful meeting is organized on the basis of the theme ‘Embracing the World for Peace & Harmony.’ This is a meeting addressed by the various religious leaders. Much as been said; there is not much more to say; time is also short. I shall only refer to one point: that Sanatana Dharma, otherwise and more popularly know as Hinduism, is the religion, is the dharma that is most conducive to bring about peace and harmony among all the peoples of the world.”

“It is not just a religion; it is a way of life, an all-inclusive way of life. It does not divide people on the basis of God and forms of worship. Sanatana Dharma, that is Hinduism, believes that though there is only one God, that God can be approached in as many ways as there are people to choose. ‘All roads lead to Rome’ is not spoken only of the city of Rome; it is much more appropriate while referring to the omnipotent, the omnipresent, the omniscient God. Therefore, Sanatana Dharma believes that there can be innumerable ways of approach to God. Each one can choose his own way of approach; there is total freedom. There is no compulsion. There is no coercion. There is no conversion. Conversion is confusion. It can even lead to bitterness. Therefore, Sanatana Dharma says each one can choose his own way of worship.

“‘God is one; Sages call It by various names.’

“According to Sanatana Dharma, God, in His infinite love, incarnates Himself again and again whenever there is a break down of dharmic order. It is not a one-time occurrence in history. The concept of the ‘Last Prophet’ also is not relevant, as far as Sanatana Dharma is concerned. Hindus believe that God is not only our Father in Heaven, God could also very well appear as our Mother on Earth. Motherhood of God is a concept accepted in Sanatana Dharma from time immemorial.

“One very strong point about Sanatana Dharma that makes it very congenial to bring about harmony among religions is its flexibility and adaptability. The adaptability of Hinduism is based on the distinction between sruti and smriti. Sruti constitutes the eternal and unchanging principles, and smriti, code of conduct and the value system to be followed, keeping in view the ever-changing life situations. This permits freedom to interpret and innovate without losing sight of the unchanging fundamental principles. Because of this Hinduism could continuously renew itself, whereas religions where the letter of the scripture is considered unalterable, putrification sets in, society stagnates, conflicts arise between the old and the new.

“Hinduism permits reason to operate and does not compel blind adherence to outdated dogmas. This was the main reason why Hinduism had no quarrel with science and reason. Advancement of science has posted no challenge or threat to Hinduism. Whereas, this was not so where faith was considered unquestionable. This special quality of Hinduism has enabled it to remain the most ancient and the most modern religion at the same time. One need not give up the ancient in order to become modern, nor discard the new in order to remain rooted in the past. Add to this the wonderful concept of Istha-devatta [one’s beloved personal deity]. A Hindu need not give up even a bit of his ancestral faith and culture to become a true follower of Jesus Christ. Nor need a genuine Christian cease to be so to retain his Hinduttva. This explains the wonderful catholicity and all-inclusiveness of Hinduism.

“So such a religious approach, a catholic approach, a universal approach, all-inclusive approach, all-embracing approach can guarantee peace and harmony among various religions in the world. It can save the world from the dark shadow of fanaticism that is visible in the horizon of nowadays.

“I don’t wish to prolong my speech. We are all blessed that we have assembled here in this august gathering on this auspicious occasion in the divine presence of the Mother. This blessing that we have got, let us all try to really deserve this blessing by living according to the expectations of Sanatana Dharma as embodied in our Beloved Amma. Thank you very much.”