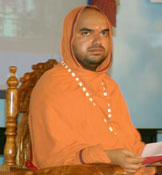 "We believe that the Advaita preached by Shankaracharya is reflected in the hug by Mata Amritanandamayi." —Sw. Raghaveshwara

“Amma as a Divine Personality”

“Salutations to the sacred soil of Kerala, the Mother land of Adi Shankaracharya, on which he laid his first step. Salutations to Malayalam, his mother tongue, in which he spoke his first word. We are pleased to participate in the Golden Jubilee Celebrations of Mata Amritanandamayi Devi, who has showered the whole world with the nectar of Her motherly love.

“One would wonder whence Mata Amritanandamayi Math and whence Ramachandrapura Math arose. When we ask ourselves these questions, what appears in our vision is the spirit of Motherhood. In this sacred land of Kerala, which has brought us here, was not Adi Shankaracharya—who forms the taproot of our parampara’s [tradition’s] great culture and heritage—born in this holy land? Hasn’t the same holy land given birth to Mata Amritanandamayi?
“Kerala is the witness to the unification of these two traditions.

“People call Kerala, God’s own land, but we call Kerala as ‘Mother’s own land’—Matrubhumi—which has the history of giving birth to Mahatmas like Acharya Shankaracharya and Mata Amritanandamayi. A mother without the vision of a Guru is blind. A Guru without the heart of a mother is lame. A mother without the vision of the Guru may help the child to grow only physically, but not spiritually and mentally. People get scared to go to a Guru devoid of the heart of a mother. We are, indeed, fortunate for, and grateful to, the land of Kerala, which has given birth to Guru Shankara with the compassionate heart of a mother and Mata Amritanandamayi with intellectual vision of a Guru. Shankara is the embodiment of putratva [a child’s duty]; Mata Amritanandamayi is a nectarly respondent of motherhood.

“We would like to quote an incident from the real life of Shankaracharya. Aryamba, his mother, in her puja [worship] used to offer milk everyday to Durga Mata [a form of the Divine Mother]. One morning—as she was busy—child Shankara was entrusted with the duty of performing the puja. He did it with total surrender and innocence, but the stone idol refused to drink the milk offered by him with such devotion. This indifference on the part of Durga Mata was painful to the little boy. Slighted and insulted, child Shankara went on crying for Mata’s benevolence. It was Shankara’s firm belief that Durga Mata would emerge out of the stone idol and sip the milk. Durga Mata, moved by the innocent child’s crying, appeared in physical form and drank the entire milk offering. But still the child continued crying. Do you know why? Durga Mata had emptied all the milk and had not left even a drop in the vessel for the little boy. Struck by the boy’s innocence, the Divine Mother fed him with Her breast milk. Shankara, having been fed by Jagan Mata Herself, became immortal by his visionary deeds and works. Indeed, he became a darshanik [a philosopher].

“This incidence brings out two points. Firstly, one can seek the blessings of the Mother in the backdrop of the great deeds of Adi Shankara. Secondly, one can also see the strength of putratva of Shankara in making the stone idol to spill the motherly compassion. Likewise, now Mata Amritanandamayi, by Her compassion, makes goodness and love of putratva bloom in the stony hearts of millions and millions of hardened souls. She lights the spark of divinity in everyone’s heart and makes him or her divine. They are, indeed, amritaputras [immortal children]. We see in the living hug that Mata extends to Her devotees, the principle of Advaita [philosophy of non-dualism] expounded by Shankaracharya. In a hug, two bodies come into contact with each other. Similarly, when the jivatman [individual soul] unifies with Paramatman [the One Supreme Soul], an immortal bliss, that is, amritananda, is established. This is Advaita. We believe that the Advaita preached by Shankaracharya is reflected in the hug by Mata Amritanandamayi.

“The subject that has been assigned to us is to speak on the divinity of Mata Amritanandamayi and its contribution to world peace. Indian philosophy proclaims that divinity is all-pervading and that all human beings are divine. However, as the moss covers pure water, the divinity in human beings is covered by negative qualities like kama [lust], krodha [anger], moha [attachment], lobha [greed], mada [ego] and malsara [jealousy]. Those who have only divine qualities are called devatas [demigods], and those who have only negative qualities are called rakshasas [demons]. Negativity and divinity both exist in human beings and dwell in their hearts and minds. Those who conquer negativity and exhibit divinity are called deva manavas [God people], like Mata Amritanandamayi.

“Every sinful act of violence is sown and grown in the minds of men before they execute them. We have to nip them at this stage. The world will become a happy place to live in when these internal enemies are conquered. Lakhs of devotees from more than 191 countries have come together in this august assembly. In the divine presence of great souls, we would like to give a message to the world: No government, however powerful it is, no army, however mighty it is, can establish peace in this world. It is possible only by Great Saints, like Mata Amritanandamayi Devi, and the Greatest among Gurus, like Adi Shankara, who can purify and transform minds.