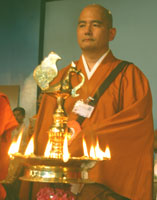 "What is needed in today’s materialistic world is not the belief in any exclusive God, but rather the recognition of the Divine Life Power underlying all things." —Rev. Takeda Hakusai

“Role & Responsibilities of Spiritual and Religious Organizations in Today’s World”

“As we enter a new millennium, the prospect of a shining new age of global spiritual awakening arising from the age of material and scientific civilization was a high expectation held by much of humanity. However, contrary to our hopes, the age began with destruction of the great Buddhist statues in Bamiyan, and, on September 11th, a horrifying terrorist act, the likes of which have never before been seen. The chain of reprisals that followed this act seem to have succeeded only in further inflaming the core menace faced by all and jeopardizing the lives of even more people around the globe.

“In Buddhism, there is a saying that ‘Amidst great evil comes great virtue.’ We people of religion must help convert these global crises caused by our own greed and misunderstanding into opportunities that will foster global solidarity. Our focus must be on the spirit inherent in all living beings.
“In Japan, we have an expression called kamiagarano michi, which means ‘living in accordance with the power of Kami.’ The Japanese Kami is often translated as ‘God,’ but to the Japanese people, the chirping of a bird, the sound of an insect, the murmur of a forest and the babble of a stream are all considered to be the voice of Kami, or Divine Spirit.

“Ancient Japanese Shintoism viewed the universe not as mere material existence, but saw a noble power within everything, and this was called ‘Kami.’ In other words, the Japanese have traditionally felt the existence of God, or life, or Divine Spirit, in all things. And in our minds, the Buddha and the Shinto Kami are one and the same thing.

“What is needed in today’s materialistic world is not the belief in any exclusive God, but rather the recognition of the Divine Life Power underlying all things. A mind that strives to see the divine inherent in all manifest things is fertile soil to realize the Buddhist principle that ‘Every living being contains a seed of the Buddha.’

“Amma Herself speaks of the role of religion in connecting man and Nature. ‘Religion is the link that binds humankind to Nature. Religion removes the ego in man, enabling him to know and experience his oneness with Nature.’ The traditional view of the religion of life in all things found in both India and Japan can be used as a tool for bringing about world peace. As Amma says, ‘Religion must not be reduced to mere scriptural injunctions. Religion must be lived through our deeds of love and compassion.’ In Buddhism, there is a teaching of seeing all living beings as one’s own children; this ultimately implies that one should have compassion and love towards all living beings. Whatever ideology one may have to justify terrorism and wars, the Creator would rejoice when children born of the same womb fight to kill each other. Let me reiterate: all human beings, as well as plants and animals in Nature, are brothers and sisters born of the same womb and share the same Buddha life. When we become a believer of this solemn truth, we can only shower love on all people, regardless of their race or religion.

“Amma calls the spirit existing in all things ‘universal consciousness.’ She says that when one becomes aware of this universal consciousness in all things, he or she will feel the pain of others as if it was his or her own. In religion, one must become aware of one’s own weaknesses and unrighteousness before one preaches righteousness to others. Religion teaches that treating life with love and tenderness is the noblest path of all. So we religious leaders must guide all human beings on earth to follow the principles of non-violence, compassion and tolerance.

“No holy books approve of war for selfish ends. It is man’s ego and desire born of ignorance, or avidya, that cause conflict. Furthermore, we people of religion have the mission to radiate light in the world, dispelling the darkness created by the ego. Even our enemies have the divine Buddha nature eminent in them. There was a great Bodhisattva who used to offer his prayers to everyone he met, seeing the divine Buddha nature inherent in them. Even if insulted or abused, he continued to pray for them as he would run away. The idea propagated by religion is not that the extermination of the enemy, but rather of perceiving the divinity inherent even in those who have forgotten it themselves and helping them to realise it. Of course, this requires tremendous understanding and compassion. There has never been seen such a time as now when the world’s religions must reconcile and solidify in order to overcome the barriers of race, politics and religious divisiveness. In order to achieve world peace, it is urgent to establish universal ethic of respect for each individual’s life.

“In Japan, we have the concepts of ‘love for all living beings’ and of bankyo dokan, ‘all religions share the same root.’ We believe that all people are brothers and sisters who share the same mind and body and the same origin. It is essential for us to share with people worldwide this idea of embracing all beings with the supreme love of God. This is the only way to promote harmony in the hearts of individuals, thus bringing about lasting peace and happiness in the world. The effort of humankind to unite and work together to govern the world must be accompanied by an even greater effort on the part of each individual to govern our own inner world. We must realize that unification by means of force will always be unstable and that only an awareness of the all-pervading divinity will create stability both within and without.

“All religions of the world must work together to avoid a potential crisis faced by all people of the 21st century. Shedding the attitude of self-righteousness, let’s engage in active dialogue to cultivate the fundamental understanding that all religions share the same root. By understand and respecting the tenets of our mutual faiths, we essentially sublimate the individual teaching of each religion into a noble universal message. Going beyond the differences of nation, religion and ideology, we must stand with the proper awareness as citizens of the planet earth, striving for the restoration of humanity to its noble state. To do this, there is no other path than that of respect for the spirit in all beings. The history of humankind must not end as a journey bound straight for Armageddon, it must become a journey of divine truths, of awakening, an awakening of each individual to the realisation of one’s true Divine Self.