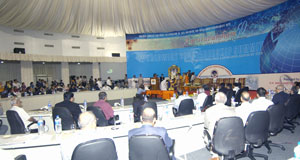 The CEOs came up with a list of Resolutions, which they then presented to President Kalam. They also sponsored five PURA communities. Amma, the President, and the heads of the Hinduja Group and Sycamore Networks also agreed to come together to launch a Leadership Institute

Following the President’s talk, a 2020 Leadership Institute was launched by Amma and the President, together with two dignitaries: Shri. S.P. Hinduja (Hinduja Group), and Shri. Gururaj Deshpande (Sycamore Networks). Subsequently, five Summit participants agreed to take responsibility for initiating PURA in their respective hometowns. It was even suggested by one business leader that the PURA scheme be renamed Amrita-PURA!

Next, “blueprints for the future” were presented by the Hinduja Group, Shri. Sabeer Bhatia (founder, Hotmail) and Shri. Rajan Mittal (director, AirTel). And three companies’ senior executives came forward to declare: “Whatever help is required, take it as given.” These companies were Intel (India), Microsoft (India) and Hewlett Packard (USA).

Then on behalf of all the corporate leaders, Dr. C.K. Prahalad, distinguished management expert and senior professor at Michigan University, presented the CEO Summit’s Resolutions to President Kalam:

In conclusion, Dr. C.K. Prahalad commented, “I have been in India many, many times, but I have not seen the type of enthusiasm that I have seen at the Amritavarsham50 Leadership Summit.”

The President expressed his happiness with the Core Group idea and vision of India cutting across borders. Unless poverty is removed globally, the President remarked, we may not get stability. He added in a lighter vein, “My term is up to 2007, and I have to market India 2020 by 2007. But today, I have got a big market share through the Amritavarsham50 CEO Summit!”