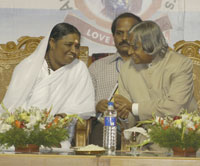 Everyone rose as Amma walked into the CEO Summit room with President Kalam. Amma and the President had just come from discussing the proceedings of the previous day’s pre-summit. Amma bowed to the CEOs and then together with the President lit the oil lamp. She prostrated once more before beginning Her address.

“Our President-mon [son] is deeply concerned about our country,” Amma said. “Children, all of you know how to run your business. But what is important in life is grace. You may put in your best efforts, but numerous factors influence the outcome. Grace fructifies our efforts. Business is for life, but life should not become a business. The talents given by God are our wealth and the wealth of the world. The greatest disaster is not death, but talent rusting while we are alive.

“The sun does not need a candle. Likewise, God does not need anything from us. Today, poverty is the cause of evils like terrorism and prostitution. We can do a lot for the betterment of the situation. President-mon has a great dream for India, and all of us should support his vision.” 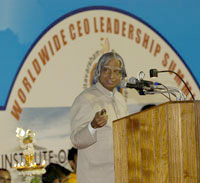 The President explained his "India2020" vision

Next President Kalam took the podium. The President started by saying that he was happy and blessed to be in Amma’s divine presence.

“You all belong to the great Indian family, and you are all born out of a vision,” he continued. “In the history of India, we have had only one vision, the vision of independence. The vision was formulated in 1857, and we became independent in 1947 – 90 years later. Between 1947 and 2003, our population increased to a billion; 260 million are living in poverty. This has lead to suffering, pain, confusion and instability of mind and society.

“Now we need to implement the second vision, which I had occasion to present to Amma in Kollam sometime back. This vision has five core areas: Agriculture & Processing, Education & Healthcare, Information & Communication Technology, Infrastructure and Self-reliance in Critical Technologies. Later, I explained to Her, the village-development strategies of PURA consisting of four connectivities to enhance the prosperity of clusters of villages in the rural areas: physical, electronic, knowledge and economic connectivity.

“Therefore, our basic strategy for social and economic transformation of India towards developed society by 2020 would be a strong focus on providing urban amenities in rural areas in the most creative and cost-effective manner. India’s consumption of food would have to double by 2020, whereas land availability for cultivation would further reduce. Fundamentally, our economic-growth strategy would be to enhance wealth generation from the services sector, and most of it should happen in rural areas. The key is to take manufacturing and services to the rural areas.

“That is why it can be seen that economic growth for India is fundamentally tied to social transformation in the knowledge, products and service sectors. Of course, this, in turn, strengthens agriculture and manufacturing. The key here is that all developmental actions have to be activated in 580,000 villages, which have missed both the Industrial Revolution and Informational Technology Revolution and, in many of the states, even the first Green Revolution.”

The President also stressed that, as spiritual connectivity was the basis for all other connectivities, Enlightened Citizens should provide moral leadership for PURA.

It wasn’t long after the President had concluded his speech that he surprised everyone by asking if he could speak again. He asked, “For the integration of economic growth and spiritual growth, can we bring in a new order instead of capitalism? How do we bring happiness into this growth?”

“How do we answer these questions?” the President asked.

After the President left, the CEOs surged around Amma for Her darshan.