President Kalam’s Address to the Youth 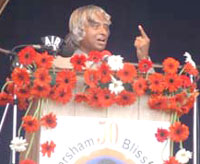 Addressing the 100,000 youth gathered in Amma's divine presence, President Kalam told them to "Dare to dream."

In the divine presence of Amma, His Excellency the President of India, Dr. A.P.J. Abdul Kalam, addressed 100,000 young people from around the world.

In a stadium awash with the colours of flags and native costumes of 193 countries, His Excellency the President of India, Dr. A.P.J. Abdul Kalam, exhorted the youth of India and the world to “dare to dream, set a goal and have a mission.”

He pointed out that whatever one wanted to become—doctor, engineer, lawyer, fashion designer or even just a good human being—one needs to dream about it and work towards achieving that goal. He also had the 100,000-odd youth gathered repeat the following words: “Learning provides thinking! Thinking provides knowledge! Knowledge makes you great!”

The President then talked about four stages in life: a child says, “Give me”; the teenager says, “Leave me alone”; when we graduate, we say, “Let’s work together”; and in the presence of Enlightened people, we say, “What can I do for you?”

He also described points in his own career that had brought him happiness, such as when his team successfully launched satellites into orbit. Beyond happiness was anand (bliss), and President Kalam said he experienced it when he saw his space technology used to improve artificial limbs for handicapped children, enabling them to run around with their new legs.

President Kalam pointed out that children all over India wanted only one thing: “To live in a happy and safe India.” How to get there? Encouraging all youth to become ambassadors of his 10-point agenda, he made them repeat the 10 points:

The President ended his speech by assuring the youth of Amma’s blessings.