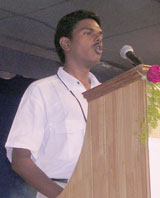 "That's what Amma does—She takes the most mundane of events and preaches the noblest of truths through it." —Sri krishna

An overview of the software engineering student’s Amritavarsham50 Youth Summit speech about Amma’s impact on his life.

In his speech, Srikrishna told of how doing seva [selfless service] for Amma helped him to transcend his egoistic feelings. When Amma came to the campus where he was studying, it was his seva to serve the special invitees. To his shock, he saw one of his female student friends among the guests. He felt it humiliating to have to serve someone he considered an equal.

The girl came from the darshan hall and asked him for a favour: would he go to a shop and buy a japa mala [beads for chanting mantras] for her to get Amma to bless. When he returned with the mala, she asked him for another—for her friend. He agreed and went back to get another. When he returned this time, she asked for one more—for her mother. At this point, Srikrishna said, he was laughing because he was running and fetching for an equal, just as he should have. He was running and surrendering.

“When Amma finally came out of the hall, breezing towards the darshan enclosure, She smiled momentarily—I would say a somewhat mischievous smile. It was for a fraction of second, but then all Her children know what Her smile can mean— especially if it is with a mischievous twinkle in Her eyes. In Her own incomparable way, She drove home the point to me that ‘Son, duty doesn’t see status, position or class. If you have been assigned a duty, perform it with all your heart, especially by blocking out the “ego imp” from accessing your mind, and that will be real seva.’

“To many people this might sound as a very common example of coincidence. But then that’s what Amma does—She takes the most mundane of events and preaches the noblest of truths through it. While relating it, it might sound so ordinary, but then the significance of the event for Amma’s concerned child, the importance the child attaches to this experience is too great to be put in words. I have only tried my level best.”