Not long after the sun rose on the morning of Amma’s Birthday, the distinctive bassy voice of Sri. Jagjit Singh drew the massive crowd into a devotional mood. Singh has thrilled audiences across the world with his original renderings of classical ghazals, a form of Arabic Persian and Urdu poetry written in a distinctive couplet style. But it was not ghazals that the master was singing this morning, but bhajans. 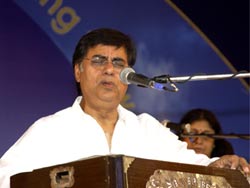 Beginning with a bhajan to Shiva, Singh, who also played harmonium, was accompanied by a backup group of seven singers and a variety of instrumentalists, including a violinist, a tablist, a dhumbek drummer, and someone on kaimani [small hand cymbals].

Singh next sang his original bhajan “Jai Jai Ma,” which was familiar to Amma’s devotees because it is frequently sung at the Ashram. As Singh praised the Goddess in the forms of Saraswati, Maha Lakshmi and Maha Kali, he raised his arm to the audience, beckoning them to join him. Near the end of the bhajan, a conch was blown, welcoming the coming of the Divine Mother. Singh immediately began the Hindi bhajan “Mera Jivan Tere Sharan” [“My Life Is Surrendered to You”]. He then followed with “Hare Rama, Hare Krishna.” 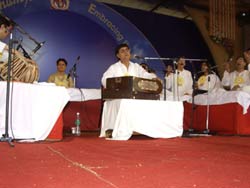 Singing all his bhajans in the same pitch, Singh was able to flow from one bhajan to the next without breaking the music. Thus throughout his set, he held the devotees in much the same was as a mother rocks a child. By the time he finished, the devotional mood was properly set for the coming of another form of the Divine Mother, Amma.