When the compere introduced Pandit Hariprasad Chaurasia, the audience quietened in expectation of a musical journey to Sri Krishna’s haunts in Vrindavan, so sublime is his playing known to be. Recipient of many awards including the Padmabhushan, Pt. Hariprasad’s ensemble also featured another flutist (Rakesh, his son), a tambura player and a tablist.

As soon as his lips touched the four-and-a-half-octave bamboo flute, the most evocative sounds emerged. We could easily imagine Lord Krishna sitting near us, entrancing our souls with enchanting melodies. 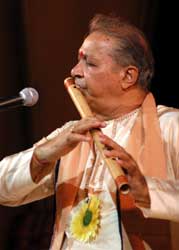 The next piece, entitled “Yoga,” was a meditative 40-minute experience. I imagined Radha and Krishna softly looking into each other’s eyes, a communion of the jivatma (individual Self) with the Paramatma (supreme Self). Ascending notes and descending notes slowly began to intensify in emphasis and strength, followed by a dialogue between flute and tabla, the language of music punctuated by occasional glances between the musicians. Sitting cross-legged on the peetham, Pt. Hariprasad appeared to reflect the posture of Lord Krishna.Before starting the next piece, Pt. Hariprasad asked the audience to listen carefully and guess what the raga was. Just as he began to play, there was a flurry of activity: Amma was coming. When She arrived, many rushed to get a seat around Her.

The raga was hamsadhvani. Perhaps, it was the brilliant mood it evoked that brought children, big and small, to Amma. But then, Amma is like the fragrant flower of the universe, drawing gopis and gopas to the nectar of Her love. Just when we thought the lilting piece had touched its final note, Pt. Hariprasad signalled to the tabla player to continue, much to everyone’s delight. With each melodic improvisation, our spirits soared higher and higher. Pt. Hariprasad concluded his concert with a folksong, then received a loving darshan from Amma.