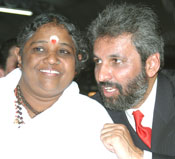 What is the significance of an event like this?

“I think this is fantastic, that Amma is able to motivate so many people around the world. I think what is unique about this is that Amma is one of the true female leaders in the world, because She has the support of almost half the world [women], as it were. There are few women with Her capacity and on Her level. Perhaps in this, Amma has started a world movement also.

“Another thing is that this event also serves as an education. A lot of people who come here can learn about what Amma is doing. They don’t know that a lot of people have come from around the world for this. They don’t know the kind of love and dedication they have for Amma. So this Amritavarsham50 was really important to bring all these people together. Let them share that this is one family of Amma’s and this movement can spread rapidly.

“History is repeating itself. I think the solutions to the world’s problems will have to come from the East, have to be rooted in the East.”

What is your special bond with Amma? What is it that attracts you to Her?

“Amma has an uncanny ability to attract people. Even a common man, who doesn’t know Her, will be attracted to Her. She has a magnetic personality. Somehow you’ll feel Her presence and you’ll be attracted to that. And having just experienced that, you feel the challenges, problems or inner struggle that you have, coming into Her hug, Her touch; you know it’ll get taken care of.”