Shortly after dawn on the first day of Amritavarsham50, the drums and cymbals of Shri. Mattanur Shankaran’s thayambaka performance began to beckon devotees from Amriteshwari Hall for the flag-raising ceremony, or Dwajarohanam. After Swami Amritaswarupananda made the surprise announcement that Amma Herself would attend the event, the crowds raced to the site.

Beneath a cream-and-gold-coloured umbrella, Amma made Her way to the sacred mast as flocks of Her children from all continents pressed forward, hoping to catch a glimpse of Her. It was a blessed moment, and everyone knew it. The pre-dawn air was abuzz with anticipation and devotion. This is how it all would begin—with the raising of a white flag with swaths of ochre and yellow, and of course, Amma’s glowing countenance. 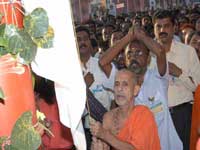 The flag hoisting as the crowd prays

Inside Amriteshwari Hall, where the morning’s Interfaith Worship had just taken place, slow chanting of the World Peace Prayer began—Om lokah samastah sukhino bhavantu—while the continuous beat of the thayambaka music welled up in intensity. Buddhists, Native American Indians, and other cultures offered their own prayers; everyone was coming together.

Along the sacred mast, decorated with fragrant flowers and sacred leaves, the flag was hoisted by H.H. Madhvacharya Swami Vishvesha Tirtha, the Head of Pejavar Math in Udupi.

Rising with it went the collective prayer—and Amma’s sankalpa [divine resolve]—for world peace and harmony. It was a triumphant moment, symbolically launching the blessed Celebrations.