Devotees on Wheels: Transportation at Amritavarsham50

“Everyday my faith in Amma is increasing along with my maturity and understanding of spirituality,” explained Mr. R. Kuppaswami, a 69-year-old retiree who served as part of the Amritavarsham50 Transportation Team. Mr. Kuppaswami and his teammates worked around the clock for several months to make sure the 100,000-plus devotees coming from across the world made it safely into Amma’s arms. 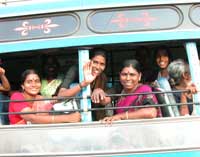 The responsibilities facing the Transportation Team were manifold. They not only had to coordinate the inflow of the devotees—by rail, road and air—but they also had to make arrangements for the devotees, performers and delegates to get back and forth from between the venue to some 300 accommodation sites during the four days of the celebrations.

Mr. Kuppaswami and his team managed the job by having a complete list of all the names and details of every registered participating devotee. They knew who, when and how every man, woman and child was getting to Cochin, and they established pickup spots at the railway station, at the airport and at bus stations.

For the celebrations, the Ashram established a fleet of about 2,500 buses in order to bring in devotees from neighbouring districts and states. This allowed many poor people from distant villages who could not afford to pay for transportation to participate. Of the 2,500 buses, about 1,000 were then used to shuttle people to and from the stadium.

The Ashram even arranged special trains to bring devotees from Bangalore and Kanyakumari to Cochin. This was to augment the regular-schedule of trains coming hourly into Cochin from all over India. Devotees travelling by rail were able to avail of a reduced rate arranged by Indian Raliway specially for Amritavarsham50-bound travellers.

At an age when most people opt for a life of leisure, Mr. Kuppaswami spent more than two months working 16 hours a day for Amma’s Transportation Team. Sometimes, he says, he even put in 20 hours a day. 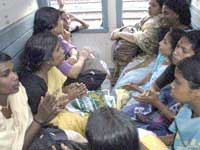 Devotees sing bhajans on the train to Amritavarsham50

When asked what drove him to work so hard, he pointed to the world’s need for a celebration like Amritavarsham50: “Amma, through this birthday, is going to spiritually awaken the dormant minds of people through out the world, which is ridden with terrorism and unrest.

“Even though Lord Krishna was unarmed during the Mahabharata War, in truth, he was really the one doing the fighting. Today, Amma is also fighting against unrighteousness. Her only weapon is love. The whole world should know about Her crusade.”